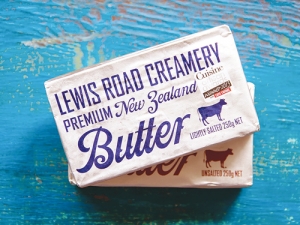 However, the company is working on getting more of its record-breaking product to existing retailers in the North Island, and is planning to launch it in the South Island.

Lewis Road in October 2014 joined with Whittakers in launching chocolate milk that caused a frenzy in North Island supermarkets; most supermarkets still ration sale of the milk.

About 40,000L of chocolate milk is processed weekly at the Green Valley plant in Mangatawhiri, south of Auckland; a new plant will be commissioned there later this year.

Lewis Road managing director Peter Cullinane says “With the new plant we can meet demand in North Island’s existing stores and supply other stores; and most importantly go to the South Island.”

He wants to “crunch” a five-year pipeline of new flavoured milk and ice cream products into 12 months to maintain momentum.

“We are keen on a coffee equivalent – coffee milk and a range of flavoured milks,” he told Dairy News. “Our view is to release the products and test the waters; if it works, it works.”

Lewis Road is also discussing with other parties “a spectacular ice cream we believe should come from us”. But the company is keen to extend chocolate milk supply nationwide before releasing new products.

Lewis Road is happy with the processing arrangement with Green Valley and has no immediate plans to bottle its own milk in the South Island.

“We are not keen on building plant ourselves, that’s not what we do. However, the more certain you are of demand, the more likely someone will be willing to step up, so I think there will be a South Island-based solution down the line.”

Cullinane says Lewis Road will do whatever the market demands.

“Our focus is to get our chocolate milk to every retailer who wants it; we don’t want any new products until we meet demand. There’s no point in coming out with new flavours at this stage if retailers can’t get the chocolate milk they want from us.”

The chocolate milk became the market leader three weeks after its release. It has doubled the size of flavoured milk segments; almost all sales have been incremental.

Cullinane says the product proves that New Zealanders love good products and are prepared to pay for them.

“That’s where Lewis Road Creamery started; it’s not about the cheapest product and lowest price. There will always be a market that needs that, but there is another market that wants good products and is prepared to pay for that.”

Cullinane says the quality of milk supplied to Green Valley from farmers in Mangatawhiri is another reason for its success. The milk is “lightly processed” by Green Valley, retaining its good qualities.

“A lot of feedback we get is that lactose-intolerant do not appear to be so when they drink our products.” Changed protein structure in other milk causes people’s reaction to it, he says. “That’s why you don’t mess with milk during the processing stage.”

The judges said the Premium Butter lightly salted is a perfect balance of texture and flavour. “It doesn’t get any better than this,” they said.

Cullinane says the recognition for its butter was “pretty cool”. “Lewis Road Creamery started with butter and I have a soft spot for butter.”

The firm has started exporting small quantities of butter to Australia and Cullinane’s vision is to sell it in UK’s upmarket Waitrose supermarkets.

“We question whether we could have a long life version of chocolate milk; we are trying to get our heads around that.”

Cullinane was in China last month to look into this. However, he says New Zealand remains the main focus of its company.

“While exports remain tempting, we want our firm base here,” he says.  “As a country we are so focussed on exports that our markets get leftovers; we think it should be the opposite. [Local customers] should get the best of everything before we export.”

Boutique dairy producer Lewis Road Creamery has eliminated 210 tonnes of fresh plastic from its packaging cycle over the last year.

Soaring butter prices may see next season’s milk price go beyond $7/kgMS – even as high as the mid sevens.