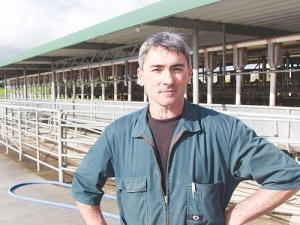 “Automatic cup removers have an instant payback. They reduce overmilking of cows and so shorten the time you are in the shed, freeing you up to do other things.”

Parker says Fieldays showed a trend for farmers to look at “getting more out of what they have by the simple addition of technology”.

“We still had farmers coming in to talk to us about new rotaries and herringbones but an increasing number wanted to look at technologies which would help them get more value and profit out of what they have.

“Many have sheds that are no longer efficient and which during the industry’s growth years would have been demolished and rebuilt. But now they prefer to optimise what they have and technology is the way to do that.”

“Modular components can be retrofitted into any milking system and immediately bring benefits.”

For example, Otorohanga farmers Vernon and Theresa Corbett retrofitted an old shed. They were sharemilking in Matamata when 80ha next to the family drystock farm in Otorohanga came up for lease.

“We already [had] 24ha that I’d been leasing off my family so the opportunity to lease the neighbouring 80ha dairy farm with a 10 year option to purchase was the opportunity we’d been waiting for,” Vernon Corbett says.

The family moved ‘back home’ in 2007 and he recalled the farm’s 18-year-old 21-aside herringbone shed had grown over the years.

“From the start we decided to use the length of the pit by adding cups to make it a 21-aside.”

The need for him to milk on his own and drench and apply teat spray prompted their decision to add cup removers. “I’ve been milking in herringbones with cup removers for 15 years and wouldn’t milk without them”.