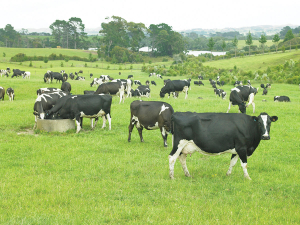 As an example, at four cows per hectare, this difference equates to 241kg urinary urea less deposited onto pasture, resulting in 41kg less nitrate leached per hectare per year.

Lincoln’s Professor of Livestock Production Pablo Gregorini says the findings are very significant for farmers and the entire agriculture sector.

“Cameron’s work shows that the cows themselves are an important tool in helping to cut nitrate leaching and nitrous oxide emissions, and in helping farmers meet their regulatory reductions. To be able to do this and increase milk protein at the same time is a huge win:win for the sector.

“Most farmers’ herds will naturally comprise a mixture of low MUNBV cows and higher MUNBV cows, with the trait being identified through testing the milk. Simply identifying the animals with low MUNBVs will enable famers to breed from their existing stock and change the makeup of their herd over time.”

Research into the differences between low MUNBV and higher MUNBV animals will continue, with Cameron Marshall studying the data to identify where further benefit-yielding research should be directed.