‘Get out and tell your stories’ 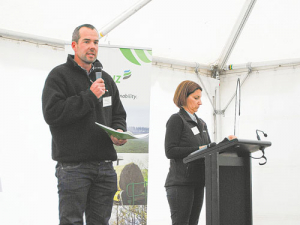 Canterbury dairy farmers are being urged to get involved in telling positive stories about their industry.

Cameron Henderson, of Oxford, told attendees at a recent DairyNZ Farmers’ Forum held at Lincoln University’s Ashley Dene farm that farmers are “a bit p***ed off with how the media is portraying us”.

“Yes, we have some changes to make, but the media is blaming us for a whole lot more than that, and I think it’s something we farmers want to do something about.”

Henderson chairs DairyCan, a newly formed group of about 15 Canterbury farmers which grew out of their involvement in the national dairy environment leaders forum.

He says the group is “trying to get farmers off their arses, basically, and get out and get involved”. It started small but he hopes it will grow and gain momentum.

Henderson says the group is working in three ways.

Firstly, it is setting a good example onfarm. Farmers should be able to feel proud of what they do, and to explain why they do it and why it’s good industry practice.

“I want to feel proud about what I do on the farm, to the point where I can show Joe Average-urbanite around the farm and not feel guilty about anything he’s seeing.”

Henderson says farmers need to know the important issues, both from farming and community perspectives.

“If we want them to understand our position we need to understand their position. Being up in Oxford in the Waimakariri District, it’s groundwater quality and how that flows into the lowland streams.”

Henderson also encourages dairy farmers to understand Overseer, even if they have employed consultants to handle it and do not want anything to do with it themselves.

“I can completely understand that. But Overseer is here to stay and it’s the lesser of two evils. If we didn’t have Overseer we might have input limits. So you don’t have to be an expert in it, but it’s best to understand the basics of how it works and how that might impact your business in future.”

Secondly, DairyCan is encouraging farmers to get out “and really tell your stories” through social media and other outlets.

“We hear all the time about the rural-urban divide and urbanites’ lack of connection with where their food comes from, and it’s a growing problem. That might be all your friends and family getting involved online, telling a bit about what you do onfarm and why you do it. It might be getting onto your zone committees – that’s really important, getting involved in councils, just getting outside the farm gate and letting people know what you do and why.”

Henderson says most of DairyCan’s work this year will focus on a third area – creating good news stories. Its first of two projects underway is producing a video similar to one that won Best Video Award for Dairy Trainee of the Year Clay Paton at the recent New Zealand Dairy Industry Awards.

Henderson says Paton’s was a much-viewed video that resonats with farmers and illustrates the same pride and emotional attachment most dairy farmers in Canterbury feel for their families, land and industry. DairyCan hopes this video will be ready before the end of this year.

The second project, says group member Tom Mason, of Greenpark, will be a focus on Coes Ford, on the lower Selwyn River, whose poor condition has grabbed the attention of the green movement even at a national level.