Getting alongside farmers is key 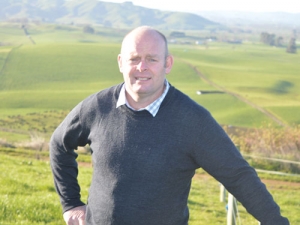 Having been raised on a 70-cow farm in Taranaki, Fonterra Shareholders Council’s new chairman Duncan Coull knows a lot about resilience.

Coull’s parents raised him and his four siblings on the farm and he is thankful for that upbringing. “It taught me about “mucking in and making do to get by – the no 8 wire mentality,” he told Dairy News.

The Otorohanga farmer has put these skills to good use; Coull and his wife Julie started as variable order sharemilkers and today own two farms milking 700 cows.

Last month he took over the reins of the farmer-elected body after serving as deputy chairman for 12 months.

Fonterra’s 10,500 farmers face one of their biggest challenges since the co-op’s formation; the slump in dairy prices has slashed the forecast milk payout to below cost of production. This follows another poor payout -- $4.40/kgMS milk price -- last year.

Coull agrees most farmers feel very anxious and vulnerable. However, farmers are aware that it’s a wider issue being played out in the global market place over commodity prices. “It’s an issue we have faced as long as this industry has been in New Zealand,” he says.

Coull’s message to farmers is to focus on things they can control on farm.

“This is a time to focus on what we are good at. If we voice our concerns in the public forum, living now in a global village… if we’re crying foul and struggling to make money and send a message to the market that things aren’t going too well for us, that’s sending a wrong message.

“We need to send a message that we’re resilient and we’re going to get through this and get out the other side.”

Apart from his farms, Coull is a founding shareholder of the consultancy company Rural Business Solutions; he started the business in 2006, following a three-year stint in banking.

He recalls that the consultancy business grew during the last downturn in 2008-09. “We guided a lot of business through some tough times; that experience has also taught me a lot about resilience… and about identifying issues in a business -- working through those issues with a defined plan and getting out the other side.”

Coull, elected to the council five years ago, was shoulder-tapped by his fellow farmers to join. “I felt compelled out of a sense of responsibility given the industry had been good to Julie and me and it was time to contribute…. I had no aspiration to become the chairman in five years.”

The 35-member council tracks Fonterra’s performance and represents farmers’ views to the board. It has recently been criticised for not taking the board to task over poor performance and low milk payouts.

Coull says the council has been “as visual as we could have been”. For good reasons discussions should be had behind closed doors.  Coull dislikes the council being called a shareholder watchdog. “I have a real issue with the term watchdog; given that the council’s role and mission statement is to improve farmer returns through effective representation and monitoring, I see the watchdog tag as quite destructive. I’d rather use the term ‘cornerstone shareholder’ – As a cornerstone shareholder we have to be responsible and accountable for our actions and work to protect and enhance our co-op’s value in the interests of all shareholders through our monitoring and representation function..”

Coull thinks the council has in the past been too inward-focused in its monitoring role and hasn’t fulfilled the representative role well.

He believes the council must focus on connecting with farmers.

“In the past farmers have viewed us as the watchdog and monitor, at the expense of being close to [them] and understanding their views and how they view the co-op.

“Given the current environment, over the next 12 months the council needs to get close to our farmers by whatever means is effective in each ward.”