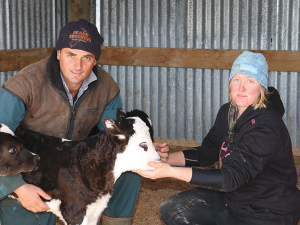 Ben Allomes with staff Charlotte Oram tending to calves on the farm.

The dairy industry must look forward continually to assess itself as fit for purpose – or not. So says retiring DairyNZ director Ben Allomes.

He says the industry has been blindsided by the ‘dirty dairy’ campaign and other ongoing attacks.

He told Dairy News that the industry’s greater technical complexity demands more professionalism of its farmers. This is not a bad thing and people will have to adjust.

“There is a lot at stake now in getting it wrong: the environment, our animals, people and finances. We are on a knife-edge, one step away from a mistake going public meaning fines, court cases and public ridicule.”

Allomes says the dairy industry has rested somewhat on its laurels after 100 years of world-leading innovation, eg herringbone and rotary milking sheds, electric fencing and the early days aerial topdressing.

But in 2005 the industry decided it was perfect and set out to defend its achievements.

“Innovation had got us to that point and we decided to protect that rather than carrying on innovating. We had a pioneering mindset of breaking new ground and we should have continued to do that,” he says.

The industry was struggling in the early 2000s with the notion that its values were being challenged. Those values – peer reviewed and formerly considered correct – were later proved incorrect. A lot of energy in those early days went into protecting the status quo, says Allomes.

“But in the last few years we have formed a new view as to what the future should, could and will look like. The world has changed and we are struggling to adapt. So we feel we have lost our mojo and that the rug has been pulled from under our feet.

“Are we better farmers than we were five years ago? Absolutely. Better than we were 10 years ago? Yes. Are we good enough farmers now to be fit for purpose in future? No.”

“My sense now is we have turned the corner and got a good direction of travel. Now its a matter of going from A to B to C to get things exactly right.”

“How do we inspire [young people] to see their future in our sector? Every time we moan or create negative publicity it is like a knife to the heart of creating connections. We need to create and promote a positive image of the industry to attract people.”

A passion for dairying

Farming has always been a part of Ben Allomes’ life.

He spent his early days on a 100 cow farm near Palmerston North before his parents took on a sheep and beef property in the Waitotara Valley and then moved back to Palmerston North.

Ben graduated in natural resource management at Massey University before exercising his passion – dairying. He married Nicky in 2001 and they have four children.

They were first lower order then 50/50 sharemilkers then in 2003 entered an equity partnership with Kay Cassells.

The Allomes won Sharemilker of the Year in 2008, the judges describing them as excellent strategic thinkers and an inspiration to colleagues.

On their three properties they now run 1300 cows and rear calves and they hold shares in a contracting business.

“We have 17 people who work for us throughout the year, not all full time but working at different seasons depending on what we and they need. Our flexible staff structure enables us to find a whole lot of new people in our community who want some hours at different times of the year and that works well for us.”

Every year the farm employs staff from Ireland or the UK. They now have Peter and Ally from Ireland who will work until about November.

Allomes says the policy works well, getting up-and-coming, highly skilled young people who want to learn and develop their skills.

“They will do a calving here and then go home and do another one there. So they get three years experience in 18 months which cements their skills if they want to be managers.

“They holiday here, are full of enthusiasm and its great for the rest of the team who get to interact with other people from different places and make good contacts overseas.”