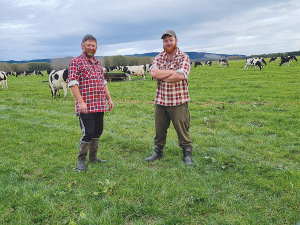 Tony Brock (left) is preparing to hand the reins of the operation and his Holstein Friesian herd to his son Cameron.

Otago Holstein Friesian breeder Tony Brock is somewhat of a rarity in dairy farming these days: he and wife Sarah have been 50:50 sharemilking on the same Kaitangata property for a quarter of a century.

He is preparing to hand the reins of the operation and his Holstein Friesian herd to his son Cameron (22), and although Tony and Sarah consciously decided to remain sharemilking, he believes it is becoming harder for young people to enter the industry or become dairy farm owners.

When the couple started sharemilking on the farm 25 years ago, Tony says it cost them about $200,000 to get the herd of 360 cows they needed.

“Now it would cost over $1 million. The figures have stretched a bit and it just makes it harder. More young people are choosing to become farm managers or contract milkers or choose not to enter the industry at all,” Tony says.

The couple dabbled in an equity partnership in Riverton for about eight years, as silent partners, but Tony says they eventually sold out of it when the milk payout dropped, and they decided to remain sharemilking on the 164ha farm.

They milk 450 cows on the property in a 44-bale rotary shed, about 80% of them Holstein Friesian.

Tony says his herd produced 420 kgMS per cow last season and they are aiming to do 480 kgMS per cow this season, feeding about 2kg of crushed barley per cow, per day during milking.

With his best cow family linking back to Estee Edition Flute S2F GP84, Tony has about 30 cows in the herd doing over 600 kgMS per cow, and seven cows that have classified as excellent.

He says they have focused on udders and protein production in their breeding and like to use young sires coming through like Meander Shot Alibi-ET S2F, currently being marketed by CRV.

“I have five daughters from him in the herd and all have very good type and good BW and PW indexes, and they are producing well. Three of them have been contract mated by CRV,” Tony says.

Tony says Cameron is slowly starting to take over the breeding decisions on the farm as they transition.

“Cameron is pretty much running the farm now. He is very keen to take over, and he does also have some big ideas,” he says.

Cameron has completed his Level Four ITO and is planning to take additional management courses in the next few years. His ultimate goal is farm ownership with a herd of around 600 cows.

“The idea is to let Cameron do what he wants to do, and I can look over his shoulder from time to. The farm owners are quite happy for Cameron to take over from us over a period of time,” Tony says.

Cameron’s mid-term goal is to raise the capital required to purchase the herd from his parents and take over the sharemilking contract.

“It’s definitely providing a pathway for Cameron and it is a pathway that is becoming much harder for young people wanting to enter dairy farming, but I have no doubt he would have done it on his own anyway,” Tony says.

A focus on creating a simple, profitable farming operation with an efficient Jersey herd is helping Zach Mounsey to grow his dairying business.