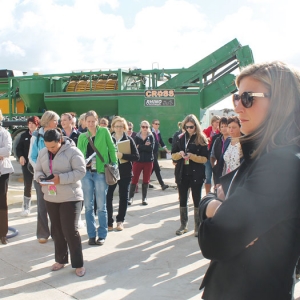 Staff can get cows to milking within five minutes in Southland’s chilly winter rather than slog round in a wet swede paddock.

That’s one big advantage of David Burnett’s 600-cow wintering barn at Waimatua, near Invercargill. The barn was the destination for an ‘Innovation Southland’ tour during the conference in Invercargill last week.

On this first-ever field trip held during a Dairy Women’s Network conference, 50 women visited the barn on the tour hosted by De Laval. Visitors heard about effluent handling, robotic milking, overall shed management and, in a session by Seed Force, the growing, harvesting and feeding of fodder beet.

Burnett’s 440ha milking platform has two sheds and about 1400 cows. He is about to go into his third season with a wintering barn for 600 cows.

He told Dairy News they take late-calving cows out of both sheds and put them into the barn where they are milked later into the season – up to about six-eight weeks before they calve. “So if they calve a month later, we milk a month later.”

He finds the shed helps to look after his pasture in the shoulder of the season. “It is easy to keep the paddocks good in the winter if you don’t have cows on them – that’s the main advantage.

“And you’re able to milk those late calving cows a little longer – it helps justify having the shed.”

Long term he hopes it will pay for itself: the cows are in better condition so they should produce better and the feed used is more efficient. But he says everyone needs to decide for themselves.

“It’s a big capital investment to put on your farm. But long term it is not too bad. It’s not something you would put on your farm if you were going to sell in the next few years because you wouldn’t get your money back. But it fits into what we want to do and our long term plans.

“There will be more and more sheds eventually. Environmentally they are good, you’ve got total control over effluent, your cows aren’t doing any damage, there’s no nutrient runoff.”

The staff are milking a bit longer “but you can either walk into the barn and get your cows out in five minutes and milk the cow under cover or you can slog round in a swede paddock in winter. So that’s not a hard decision.”

The full setup cost about $2 million, the shed itself about $1.6 million.