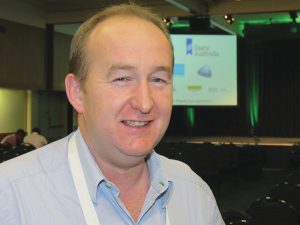 An Irish dairy researcher says despite admiring New Zealand’s dairy industry he has concerns about it.

He discussed his concerns with Dairy News reporter Peter Burke at the recent Australasian Dairy Science Symposium in Palmerston North.

Laurence Shalloo is a scientist at Teagasc, the Irish research and advisory service where he is expert in benchmarking farming systems to determine their profitability.

He says Ireland and NZ have much in common, especially their pasture-based dairy systems. But he is concerned about NZ farmers’ high debt levels and their stocking rates – higher than in Ireland. He wonders whether both contribute to NZ dairy’s problems, especially the environmental costs it must now bear.

“The one thing we in Ireland look on negatively is high levels of debt,” Shalloo says. “In Ireland the average debt onfarm is about 80,000 euros (NZ$130k).

“You need some debt for expansion but the levels of debt in the NZ industry seem strong. High debt and high-cost production plus a volatile milk price are not a good mix.”

Shalloo contrasts NZ’s 2.9/ha stocking rate with Ireland’s mere 2.0/ha. This worries him, although he admits that stocking in Ireland will rise as dairy keeps expanding as a result of the EU lifting milk quotas in 2015; milk production has since risen markedly.

But Shalloo says Ireland’s farmers are getting the message that an increase in stocking rates must be linked to increased production.

Of all the EU countries, Ireland faces the most challenges from any sort of Brexit – be it hard, soft or in between.

Laurence Shalloo says any sort of  Brexit will be a disaster for Ireland, Europe and the UK. He says for the last two years Ireland has worked on plans to lessen the impact of Brexit on its agricultural sector.

“About 50% of our cheddar goes to the UK plus a large proportion of our other agricultural products. And Ireland is taking an aggressive approach to diversify into other markets such as China, the Middle East and Africa. We have a strong focus on the US and are now the second-biggest exporter of butter into that market.”

The large Irish food company Glambia is selling to the US, including ‘grass fed’ products. NZ is also doing the same. Shalloo notes that consumption of dairy products generally is rising in the US.

Under Origin Green every farm in Ireland has its environmental footprint audited every 18 months. And the Irish Food Board –  Bord Bia –  is collecting and collating scientific data to support claims to Origin Green’s environmental strength.