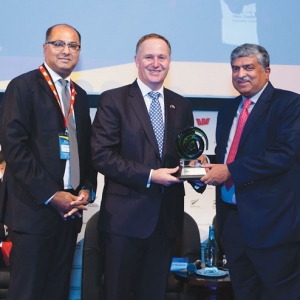 Prime Minister John Key says India knows it needs a free trade agreement (FTA) with New Zealand, though an FTA is always “challenging” for the agricultural sector of any country we negotiate with.

But the technology transfers and other benefits to India of an FTA would far outweigh any downside for Indian producers of New Zealanders selling products there, Key told an Auckland business summit.

He said the former Indian Prime Minister Manmohan Singh had told him privately that he “had to feed his people” and “it was not easy”.

India has over a billion people so there are massive opportunities for New Zealand companies there, Key told the India New Zealand Business Council summit in Auckland on March 13.  “Capturing a tiny fraction of that market is massive from New Zealand’s point of view. But it’s equally important for India.

“The FTA will only happen when Indian companies lobby the Indian Government because there will always be resistance.

“An FTA doesn’t complete economic transactions; it is actually just an entree to each other’s markets. It is a symbol that you are very serious about what you are doing and you want to build a long term relationship.”

The summit was attended by business leaders and entrepreneurs from India, many here for the World Cup Cricket.

Key’s comments were part of a wide range of views on the FTA, with a number of Indian representatives arguing that an FTA was not immediately necessary for good business collaboration and partnerships between the business communities of both countries. New Zealand’s technology, ideas, innovation and know-how, including dairy production, processing and supply chains, were cited as among the best “products” we could export.

Several speakers also said dealing with the individual states and sectors within India may provide more immediate opportunities for business and trade than getting a government-to-government agreement.

Rupert Holborow, MFAT economic division manager, who led the 10th round of the FTA negotiations with India, says India’s population will soon be the world’s largest and its younger demographic and growing GDP should compel New Zealand to recognise it needs to engage more with India.

He said an FTA would bring tangible benefits but was also symbolic as a statement of intent by both governments as to how they wanted to characterise the bilateral relationship as it develops.

However, just home from leading the 10th round, he said “with sadness I [see] there is still a considerable distance to close if we are to conclude our FTA. I can’t see it happening imminently. I wish I could say otherwise; it’s a tough long road ahead.”

But New Zealand hasn’t lost hope and doesn’t intend giving up. “But a key message is... I don’t believe we should hold off our engagement strategy with India waiting for something that may still take some time to materialise.”

Primary Industries Minister Nathan Guy said India has the world’s largest dairy industry and a “milk revolution” could be achieved by modernising the supply chain and improving productivity by better animal husbandry and genetics. “These are all areas New Zealand knows a lot about and creates exciting opportunities in partnerships between the two countries.” New Zealand also offered high value premium products.

INZBC executive member Sameer Handa said for New Zealand business trying to start in India, the country is too big so they should bring it down to the states, the sectors and the markets they wanted to get into.

“That state level understanding is crucial; that is the unit in which you can actually do business.” He says the new Prime Minister, Narendra Modi, has launched ‘cooperative federalism’ which is pushing more money and responsibility to state level. Many reforms will be at state level.

Entrepreneur Nandan Nilekani also said “don’t get stuck on Dehli. Go to the state governments because they can get a lot of stuff done now. That is the way forward. Do not be obsessed with whether things get done in Dehli or not.”

China trade great but what if...?

“I am very pro our China relationship as New Zealanders would know. I have stood up for that relationship despite the politics that sometimes collect along the way.” It has made New Zealand stronger and seen us through the global financial crisis.

“But New Zealand has had experience of being too dependent on one market… when we were pretty much Britain’s farm in the South Pacific. When it joined the European Common Market in the early 1970s the impact on New Zealand was dramatic.

“The long term risk to New Zealand would be [our becoming] totally China-dependent, and then if, for whatever reason, the relationship going sour; or it might be something completely beyond our control.”