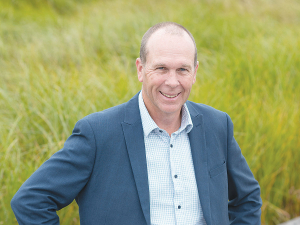 He told Dairy News that the uncertainties caused internationally by Covid-19 are well known. He points particularly to the lockdowns in Shanghai, which have severely disrupted shipping schedules, and war in Ukraine preventing one of the world's major grain producers shipping product out of the country. He says this is fuelling uncertainty over dairy prices and in recent weeks prices on Global Dairy Trade (GDT) have fallen.

Leslie took up his new role with Pamū in March, having previously worked as the chief operating officer for Silver Fern Farms and Fonterra. At Fonterra his roles included being head of the operations and supply chain component of the brands business in New Zealand, and before that being in charge of operations at 94 ingredients plants across 27 sites, along with the associated milk collection activities.

Leslie was brought up on the family dairy farm at Reporoa in the central North Island. He holds a Bachelor of Agricultural Science (Hons) and a Masters of Business Administration (with Distinction), both from Massey University. Over the years he's always had a positive impression about Pamū and in his two previous roles, Pamū was a supplier. At a personal level he knows the Pamū farms at Wairakei Pastoral which are fairly close to the family farm at Reporoa.

Since taking on his new role at Pamū, Leslie has met a lot of people in the office and around the farms and says he's impressed with the dedication and passion of the farm teams.

He says this probably shouldn't have been surprsed him. He says they are great teams and, like any farmers, they face the challenges of weather - be that on the East Coast or down south with the drought, and now problems obtaining processing space due to labour shortages in the plants.

"That's been one of the highlights, the people side of it and the personal commitment they take in treating a lot of those farms like their own," he says.

"The challenges facing Pamū are no different to other farming operations. Attracting staff [and] ensuring the company continues to operate as a profitable business. There are challenges of dealing with climate change or adapting to some of these extreme weather events or water quality and things like that. There is a large amount of change there and it's a case of managing that through in a practical sense."

Mark Leslie is happy with Pamū's general strategic direction and says there will continue to be a focus on looking at emissions reduction.

He says also important to the organisation is the number of partnerships that have been developed with industry-good organisations, Crown Research Institutes (CRI's), fertiliser co-ops and other companies.

He says they will also continue to test and trial new ideas and share this information with the wider farming community.

Leslie says he knows there is criticism of some of Pamū's ventures and, while he acknowledges they have the advantage of scale, he points out the companhy has to operate profitability.

"We need to acknowledge that many of our farm are on challenging lands.

"Someone once said to me, the reason we have got this land is because nobody else wanted to farm it, and remember a number of our farms are on the steep hill country that is six, seven and eight class country," he says.

The company has 51 dairy farms which produce 165 million litres of milk annually and he says from a purely volume perspective they will do the same. But he says they will continue to look at diversification around organics and some of the different farming systems based on the economic benefits.

He says equally and importantly is how their dairy operations align with Pamū's beef units. He says, apart from breeding replacements for the dairy herds, Pamū is making sure it gets the right genetics for breeding dairy beef which can be integrated into their beef farming operations.

Leslie says they are looking at all options in this regard including new generation beef, but also taking animals through to 24 months.

Overall Leslie says they face the same issues as other dairy farmers, albeit on a larger scale.

"We are facing difficulties in attracting staff, equally we are making sure with our current staff that we develop and grow them.

"While we want to keep our best people, if we see some of the really good farm managers take the next step into a larger job or sharemilking or ultimately to farm ownership, then that gives us a level of pride... that we have provided that stepping stone for them," he says.

Finally, Leslie says that Pamū is a large farming operation, it has to pay taxes, rates and interests and also pay a dividend to its shareholder - the Government.