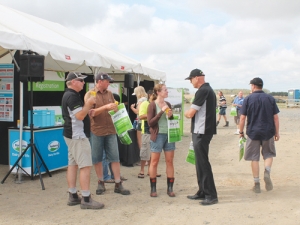 Farmers will now be held responsible for any accidents involving visitors to their farms.

That is the advice of a Northland farmer whose employee had his arm crushed in an incident.

The farmer says he was alarmed when he arrived back at his house to find the worker had crushed his arm between a silage grab and a feed wagon.

He helped to stabilise the bleeding and saw his worker safely off to the hospital then called his lawyer, a step that paid off in a big way, he says. "Because I'd talked to the lawyer I had a good idea of what to say."

The farmer had training procedures in place, had set procedures for tasks, discussed safety concerns at the start of every meeting and had a maintenance register in place. Some things like the training weren't recorded and he believes he would have forgotten to mention it when Work and Safety inspectors called. "Calling the lawyer was pretty important."

WorkSafe NZ (then Occupational Safety and Health) told the farmer he would not be prosecuted as he had taken all the correct steps to prevent accidents, though their reply was six months coming.

Hazardco national sales manager for agriculture and horticulture Jamie Potter says this will be especially so once new legislation is passed this October.

Potter told audiences at a Far North Beef + Lamb NZ field day and a Dargaville DairyNZ, Federated Farmers and FMG risk management workshop that fines will skyrocket and more people will be liable for prosecution under new legislation.

Maximum fines are expected to go from $200,000 to $3 million, and more people will be liable for fines – managers, directors, farm owners and sometimes lesees. "WorkSafe is looking to hold a wider range of people accountable. Directors for example can't just say 'we don't get involved in the farm', or 'we knew about that issue but deferred it this season because we didn't have enough money'."

Potter says WorkSafe investigators will look at contributing factors to the accident before asking people involved in the operation of the farm if that factor was known about or discussed. "In cases of mechanical failure of some kind they'd see if the piece of equipment was listed or if the farmer would have known about it.

"If it was known by the worker but not the farmer, in today's environment the worker may find themselves getting a call from WorkSafe."

However he says the process can be broken down into five main categories: hazard identification, health and safety policies, suitable staff training, documented procedures for tasks and suitably maintained equipment. "If farmers can tick all those boxes then there is a good chance they won't face any prosecution."

Worksafe inspectors carrying out random farming inspections are likely to look for the same level of details, according to Potter. Inspectors will rate adoption of principles over the ability to produce documents.
Farmers at both meetings expressed concerns about liabilities with visitors and contractors on the farm.

Potter says there are two types of visitors: those invited onto the property and those the farmer had no knowledge about.

He says while those invited onto the property need to be told of any hazards not normally expected in a farming environment, the farmer will be held accountable for accidents involving these hazards, but there is a much lower indemnity for visitors the farmer didn't welcome on.

Putting in procedures and improving safety is about more than meeting rules, says the farmer; it is ensuring that everybody on the farm is taken care of.

"That accident still haunts me. If he was standing a little differently or the silage grab and had fallen a different way it could have taken more than his arm."

WorkSafe New Zealand is advising farmers to buckle up after an analysis of vehicle-related fatalities found that nearly half of those that occur on farm could have been avoided if a seatbelt was being used.