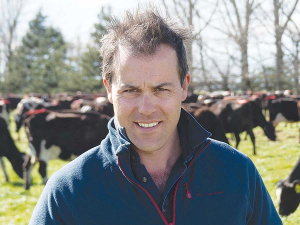 The 34-year-old was raised in a semi-rural district near Auckland with parents who weren’t farmers, but with an aunt who was sharemilking.

“I pretty much wanted to do this since I was seven. So I say I’m living the dream,” says Groves.

“Sometimes it doesn’t feel like it when you get up at half past four but I’ve always wanted to do agriculture and dairy farming was a passion.”

Groves followed the advice of his parents and others to go into farming via Lincoln University, where he won a four-year DairyNZ tuition scholarship and graduated with an Honours degree in Agricultural Science.

“Dairy farming’s not just putting cups on cows. There’s a whole science behind it. Even on a small farm you’re a multimillion dollar business with assets and income. There’s a lot at stake,” says Groves.

Groves’ progression through the industry hasn’t all been smooth. He was sharemilking on his wife Ginny’s parents’ farm at Pleasant Point when the low-payout years hit and he ended up having to sell his herd. Another tough, loss-making year of contract milking followed.

Then in 2017 he had the opportunity to buy the current farm at Hinds in an equity partnership with the in-laws.

They sold off 67ha to a neighbour to make the deal affordable, leaving them with a small-for-Canterbury 120ha.

“So we’ve progressed though the sharemilking system and leveraged ourselves significantly. We’re really driven on this place to be profitable, pay debt back and get the environmental footprint right.”

Groves is part of a DairyNZ Hinds catchment group that has been working together to figure out the best systems to maintain profitability with environmental responsibility.

Running the farm with two staff members, Groves has trimmed cow numbers from a high of 445 by culling the poorer performers. He plans to milk 415 cows at peak this season, as he seeks “that fine balance.”

He is also working on reducing nitrogen fertiliser inputs and will grow fodder beet on farm to reduce the amount of higher-protein autumn baleage fed out.

“The science around the fodder beet into Overseer is not exact yet but I think we’ve got to just go with it. The major one is that supplement use for us – just using that low protein supplement in Autumn.

“Autumn’s your biggest period of nitrate leaching because it’s sitting in the soil, and if you’re going to get a huge rainfall event it just drains down the bottom.

“We don’t apply any fertiliser in May.”

However, Groves says new water regulations are “frightening” and risk losing the buy-in farmers had with the previous nitrate reduction goals.

“There are 50 farmers between Hinds/Hekeao Plains and the Selwyn/Waihora catchment that are part of this reduced nitrates program – farmers leading farmers.

“That’s a great thing to do, but if the end goal is not achievable, what do we do?”

He doesn’t believe there is much science behind a limit of 2.4mg/l for nitrates, whereas there was buy-in for the target of 6.9.

“If you make things extremely difficult farmers will just go, ‘well, I was never going to reach it’.”

Groves also says it was “scary” that it took Southland farmers to “really throw their toys out” to get make the Government understand that new wintering rules are unworkable.

Groves’ bid to join the DairyNZ Board is a natural progression in a career which has emphasised governance roles and community involvement from an early stage. A finalist in the 2011 Young Farmer of the Year competition, he has been a director and chair of Young Farmers, has taken part in governance development programmes through both Fonterra and Silver Fern Farms and is a board observer for Mayfield Hinds Irrigation Ltd.

He is also chair of the National Mastitis Advisory Committee and a member of the Mid-Canterbury Rural Support Trust.

In the community, he chairs the board of the local Hinds Primary School, attended by his daughter Ebony, 6, and is a director of the Geraldine pre-school attended by Hunter, 4. Wife Ginny is co-owner of a children’s clothing store in Geraldine.

Groves previously stood unsuccessfully for the DairyNZ board in 2017 but was then accepted for a six-month associate directorship.

“That doesn’t scare me. I was shoulder-tapped by a few significant suppliers to stand, firstly because it gives people options, it exposes me to the rest of the levy-payers and I bring something different to Jim and Colin – I’m still fully hands-on my dairy farm, pretty grounded, hopefully, and I’m driven by what I do on farm, but also driven to make sure that I have an effect on the industry positively.”

Van der Poel and Glass are both seeking to retain seats on the board that they are vacating by rotation. If Groves had not put his hand up there would be no election.

“In my mind, if someone doesn’t stand against them, there’s no options for people and if people want change you can provide that,” he says.

“You need to challenge the people that are around the table. If they get on they’ve got the support to be there.”

Groves says farmers generally do not see what DairyNZ does behind the scenes, such as its advocacy role around the table with the Government, which he did not fully understand until his stint as an associate director in 2018.

Although farmers have recently voted to reconfirm the milk solids levy (currently 3.6c/kgMS) Groves believes trust and transparency have been lost. Big levy-payers especially want to know where their money is going.

“They don’t disagree that DairyNZ should exist but there needs to be some trust and I think just having someone round the board table who actually lives and breathes milk and cows, and the environmental side of it, and the financial side of it, would be quite a great asset for us.”

Postal voting is now open, with the result to be announced at the DairyNZ AGM in Ashburton on October 21.