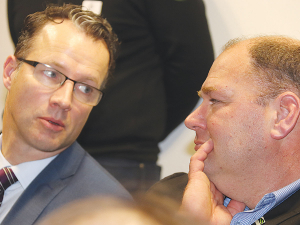 In a historic move, 11 primary sector groups have agreed to work with the Government to tackle climate change.

The 11 groups make up nearly half NZ’s total emissions and jointly are the largest contributor to our greenhouse gas emissions. Shaw noted the remarkable shift in the agriculture sector in the last few years, especially the last few months, and he says this has resulted in the parties striking a deal to work together.

“I’m happy with the agriculture sector saying it wants to lead on climate change and on reducing emissions. Leading farmers have long been putting in place incredible innovation... to increase efficiencies on farm.”

Shaw said the new agreement will take these farmers’ good practice and roll it out NZ-wide. To achieve this will require a roll-out of new infrastructure and technology, some of it yet to be invented.

O’Connor also noted the significance of farmers and the Government working together.

He says consumers know NZ produces the world’s finest food and they demand to know how food is produced and the animal welfare and climate change aspects of the story.

“We now have competitors claiming zero carbon beef and other food so we must step up and match their expectations in the market place.

“We have made huge steps in working with farmers and industry leaders to... get a system that will incentivise more efficient production of food.

“My concern is to give the right signals to the right people to get the right change in practice and the correct balance in getting profitability and change in on farm practice,” O’Connor said.

The NZ Government’s view is contained in a 144-page report by the Interim Climate Change Committee (ICCC).

The ICCC, an independent expert body, was asked to map a pathway to deal with emissions from electricity generation and agriculture.

The committee says no policy exists to deal with agriculture emissions, so such a policy is needed to motivate farmers to play a part in reducing emissions.

To achieve this the ICCC proposes levying $47 million a year to spend on developing skills and technologies to help farmers deal with emissions, effective 2025. Farmers would receive a 95% discount on emissions in line with other industries.

The levy proposed is 1c/kgMS on dairy, 1 cent/kg on beef and 3 cents/kg on sheepmeat.

On the proposed levy the agriculture sector group parts from the Government.

They unveiled their own paper -- He Waka Eka Noa (Our Future in Our Hands) -- which proposes that the industry-good organisations themselves lead the change.

While all the groups support change in principle, they argue that a levy at processor level will not incentivise farmers to change.

Andrew Hoggard of Federated Farmers says the levy approach could encourage the wrong sort of behaviour.

“For example, the levy might incentivise farmers to go out and buy more PKE to produce more milk to pay the levy or tax,” he says.

Hoggard says farmers need knowledge about emissions on farm and new technologies to help them. The industry proposal to have the sector’s groups working closely with farmers is the best option for cutting emissions, he says.

Hoggard insisted that farmers are not sitting on their hands doing nothing, and do not lack of willingness to change – they simply lack the tools to do it.

“Unlike for a fossil fuel-powered vehicle there is no ‘electric sheep’ equivalent for farmers. But there is potential for methane inhibitors or a vaccine, albeit some years away from proof and coming to market,” he says.

DairyNZ chief executive Dr Tim Mackle says the dairy industry understands that it operates in a context of all NZ and there is work to do. The whole sector working with the Government would be special and it agrees with the ICCC on the need for change at farm level.

“Generally we want to move in the same direction but we disagree with the ICCC on the levy solution which farmers will see as a blunt instrument and a broad based tax,” he says.

As an alternative DairyNZ proposes a five year effort to build an enduring farm-level emission reduction framework and work with farmers and the wider rural sector on real options to reduce emissions.

“While appropriate pricing mechanisms for incentivising emissions reductions at farm level can have an important role to play in incentivising change, creating an environment that enables and supports farmers and growers to make changes on the ground is equally important to prepare for farm based pricing from 2025,” Mackle says.

Interestingly, O’Connor noted during the media conference that he sympathises with farmers’ views, and he said diluting of signals to farmers may not encourage them to change.

The Government’s and agricultural sector’s documents are now out for consultation and will be decided on in a few months.