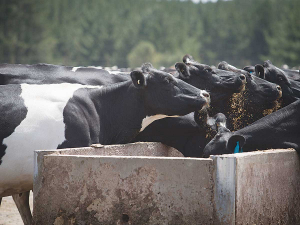 Cows with low blood calcium have less chance in resisting infection or fighting current ones.

There can be various reasons for the occurrence of both, but one of the main reasons is clinical and sub-clinical milk fever. In New Zealand approximately 40% of the herd will experience either clinical (typically downer or sad cow) or sub clinical milk fever. While cows are rarely culled (outside of deaths) for milk fever itself, they are regularly culled for other reasons that are caused by milk fever.

We know that herds with high incidence of metabolics have poor health, but is it really related? In fact, published research has shown that milk fever, clinical or sub clinical, directly increases the incidence of many diseases. In one study early stage mastitis increased the odds ratio by 8.1 and in the case of retained foetal membranes, which lead to metritis the increase was 3.2 (Curtis 1983).

Mastitis and metritis are major reasons for cows leaving the herd and costing money. They cost money because we can’t sell the milk and have to treat them, and they leave the herd because the chance of getting in calf is much less, especially in our seasonal systems.

However, there are two other major costs that are rarely monitored. The first is the time associated with these diseases. How much time are your staff tending to these diseases? The second is opportunity cost. If the cow leaves within 50 days in milk she has cost you a full lactation worth of milk because you have already wintered her, calved her and her salvage value was much less than at the end of last season.

Why does milk fever increase the risk of these diseases? There are two main reasons.

The first is immunity. Recent research has shown that low blood calcium reduces a measure of immunity called neutrophil oxidative burst, which means the ability of neutrophils to destroy pathogens or disease causing cells (Martinez 2014). This basically means that cows with low blood calcium have less chance in resisting infection or fighting current ones.

The second reasons is muscle strength. Calcium is critical for muscle strength. Smooth muscles are often the first muscles to lose strength when calcium is deficient. The ones we are concerned about in this case are in the uterus and the teat sphincters. In the first case poor teat sphincter closure means easy access for bugs post milking, a good sign of this in your heard is leaking milk. For the uterus it means the inability to crunch down and expel the placenta cleanly.

At the end of the season when you are summarising why cows left your herd during the year and why they are about too because they are empty, think past the initial symptom. Start thinking about the cause.

In this calm before the calving season a bit of planning now will help herds get through without the risk of metabolic disorders, such as milk fever, says ruminant feed company SealesWinslow.