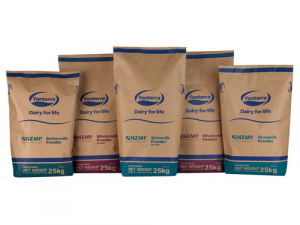 Milk powder, which made up 56% of the milk powder, butter, and cheese commodity group in January 2017, more than offset lower sales for other goods, leaving overall exports up 0.3% or $13 million.

When compared to the same period of the previous year, milk powder exports have risen in the last four months, after generally falling since September 2009.

“The recent rises in the value of dairy shows exporters are getting a better price for their milk powder exports than they were at this time last year,” international statistics senior manager Daria Kwon said.

“The fall in milk powder quantity this month reflects this, with exporters getting more value for less product.”

Crude oil, meat, and fruit all rose in January 2017. These rises were partly offset by falls in other commodities, such as casein, wool, and logs.

The trade balance for January 2017 was a deficit of $285 million. Excluding crude oil exports and imports, the deficit was $36 million.