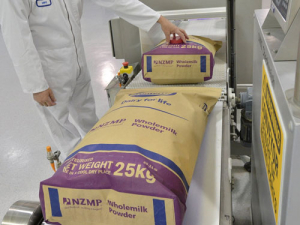 Their latest forecast hits the top end of Fonterra's forecast milk price range of $7.90 to $8.90/kgMS. The co-operative is expected to upgrade its forecast early next month.

Strong demand and tight global supply, including soft milk production figures from New Zealand processors in the past few months, are putting upward pressure on prices.

"Both August and September outcomes are around 4% below the corresponding months a year ago," he says.

"This sets up the season overall to be lower than the prior year."

However, milk production around the globe remains subdued, says Steel.

He notes that milk production growth in the EU has been subdued with output in many key EU countries slipping below year earlier levels.

Australian milk output is down more than 3% year to date. And in the US, September milk production was a mere 0.2% higher than a year earlier.

"We have long been sceptical that global milk supply would respond meaningfully to elevated dairy prices. In part, this is because we saw limited milk supply as a key factor behind higher prices in the first place on rising costs.

"Take the US for example. The US milk price-to-feed ratio has been significantly below average all year, raising the risk that US milk production dips below year earlier levels over coming months."

Steel says all this suggests dairy product prices will be stronger for longer than previously anticipated.

Westpac senior agri economist Nathan Penny says the key catalyst for the 2021/22 forecast revision is the downgrade to forecast production for the season.

"Previously, we expected production to fall by 1%. This season, New Zealand production has been on the back foot.

"Winter and spring have been either wet or cold or both in many parts of the country.

"As a result, production for the first four months of the season is running at 3.1% behind the same stage of last season."

Coupled with soft dairy production elsewhere in the world thanks to very high feed costs and limited feed availability, strong milk prices could be here to stay.