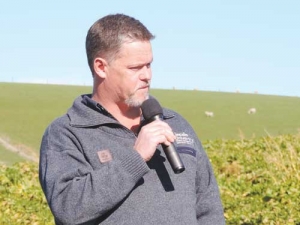 DairyNZ advice to limit dairy cows to 8kgDM/head/day of fodder beet is “right in the danger zone” a leading researcher into the crop’s use is warning.

Lincoln University’s Jim Gibbs says limiting intake at that level is highly dangerous because if cows gain access to much more than that, they will eat enough to “crash” the rumen through acidosis.

“It will kill cows. I can’t put it more plainly than that,” he told Dairy News.

A much safer approach is to transition cows to a point where they are at or close to ad-lib intakes of fodder beet. Then, should a breakout or serious misallocation of feed occur for whatever reason, cows won’t eat much more than they’ve been used to.

“At 8kg drymatter a day if they get out they’ll easily eat 12kg but if they’re already eating 12kg/day it’s not a problem,” he explains.

That finding counters the conventional wisdom that high starch content of beet results in low rumen pH – even acidosis.

A possible explanation is ad-lib feeding encourages more even intake throughout the day and consequently less variation in rumen pH, Gibbs and his co-author Prendergast suggest in the NZSAP paper.

They also found ad-lib beet produced nearly 25% more rumen microbial protein per kgDM eaten, which could explain why mobs of cattle on beet do better than would be expected from their crude protein intake alone, and better than on grass despite its higher crude protein, he says.

The ruminal urea concentration was also higher on beet compared to grass, suggesting cattle on beet recycle more urea through the rumen rather than excreting it.

“The amount of nitrogen intake required for the liveweight gains we’re achieving is relatively restricted and the nitrogen excretion is a positive because they are so efficient at using it.”

While the NZSAP paper is based on recent work with steers, Gibbs says there’s no reason why the rumen environment in cows should be any different.

“We have previous data with dry cows, pregnant cows, steers. There’s no difference.”

Given their findings and years of previous work, not to mention widespread on-farm success with high beet intakes, Gibbs says he was left bemused by DairyNZ’s June 2 advisory warning against ad-lib beet feeding and to limit intake to 8kgDM/ha/day plus 4-5kgDM/day of other feed.

In the advisory, DairyNZ senior scientist Gary Waghorn said feeding over 70% fodder beet “could kill some of your cows.”

“Needless to say, my phone’s been running red hot since that went out,” Gibbs said.

DairyNZ’s senior scientist in the feed and farm systems group, Dawn Dalley, defended the 70% recommendation, arguing that where cows are only on beet for 50-60 days over winter, the 30 days required to safely transition cows to an ad-lib regime is too long.

“It comes down to your attention to detail in setting up for winter. We’ve had cows wintered on a 70:30 diet at Ashley Dene [near Lincoln] now for four years with no issues; no breakouts and we’re only using standard electric fencing.”

The trial her colleagues Waghorn and Kay cited was designed to investigate nitrogen metabolism on beet and other feeds and only involved eight cows per treatment. The cows that crashed at 85% beet were transitioned over 20 days and “probably should have been transitioned for longer,” Dalley added, acknowledging there are many experienced fodder beet users succeeding with ad-lib regimes.

But Gibbs says the need for such long transitions and high supplement rates is not supported by the experimentary data or hundreds of farms experience which shows a 14-day transition is adequate.