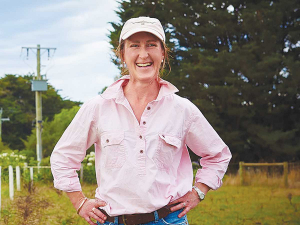 Australian farmer Lisa Dwyer is paving the way for greater diversity in the dairy industry and showing the next generation that there is more to dairy than milking cows.

Dwyer has been dairy farming for 17 years, and unlike her husband Eddie, who has been around dairy his entire life, working on the family farm, her background is in management in the thoroughbred racing industry.

Lisa and Eddie bought their first farm in 2004, 344ha in Hawkesdale south-west Victoria. Lisa’s management skills, combined with Eddie’s dairy experience, had them running their Hawkesdale farm before moving to Purnim in 2018.

The Purnim farm was originally established by Lisa’s great-grandfather, her grand-father farmed there, her father was born there and when they bought the farm, their son Harvey became the fifth generation to live and work there, and according to Lisa “it was all meant to be”.

When asked about what got her into dairy, she always gives the short answer.

“I was ambushed by a marriage proposal 17 years ago by a dairy farmer and made the fatal mistake of impressing him with a new pair of rubber boots.

“Since then, they’ve been worn daily, worn-out annually and no matter what my husband says, I will never accept that a replacement pair of rubber boots constitutes a new pair of shoes,” says Lisa.

At around 4.15am, Eddie and Lisa fight about who is going for the cows each morning and once that’s settled…she gets out of bed and goes for the cows.

And, like every dairy farm across Australia, there are never enough hours in the day to get everything done, but they do their best to follow their always-evolving business plan and set their priorities accordingly.

Lisa is busy enough with the farm, yet she is also an active member of the dairy industry.

According to Lisa, every day she sees the symptoms of an agricultural sector not realising its potential because people don’t desire to learn, seek to better understand or grow by entertaining another perspective.

“Despite the inevitable and unfortunate criticism anyone fulfilling a position of responsibility receives, I’d much rather know that I’ve done my best to make a positive contribution than sit in the safety and anonymity of the sidelines and criticise or worse still, undermine the genuine efforts of others who try.”

Although she says it’s not the easiest way to earn a living when you consider the number of major impacts upon which farmers have no control, she wouldn’t change it.

“The thing I love about dairy is that the opportunities are limited only by your imagination and your determination to pursue them.

“When we started out, the only thing we owned that was new was probably my rubber boots. We’ve encountered drought, the global financial crisis, disease and the industry downturns, yet I can’t think of another business or sector where we would have been able to achieve the things that we have outside of dairy farming.

“Despite the inevitable volatility that exists within agriculture, I’m convinced that the future for Australian agriculture is substantial if we can maintain an unshakeable commitment to constantly improving the way we do things – with an eye to the future rather than the past, and a broader appreciation for how the world in which we live is changing and evolving our businesses and production accordingly.”

Lisa is passionate about getting women into dairy and she has some sound advice to someone starting out.

“Don’t listen to anyone who tells you it can’t be done, it’s too hard or there’s no money in dairy farming.”