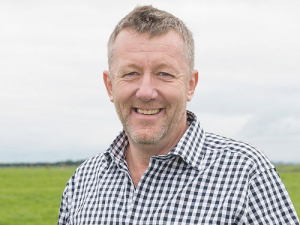 The Fonterra board needs real farmers with their own skin in the game, says would-be director John Nicholls.

He is one of two self-nominated candidates, up against three endorsed by the candidate assessment panel. He believes it is a system “not 100% fit for purpose” because of its tendency to favour directors “whose day-to-day revenue line does not depend on milk”.

This process could end up with five or six out of the seven farmer-elected members being professional directors/executives rather than farmers, he says.

Along with his wife Kelly, Nicholls owns the Rylib Group, which has six dairy farms in the Hinds area of Mid-Canterbury.  Nicholls is also chair of MHV Water, an irrigation cooperative supplying water to 50,000ha in the Ashburton district.

“Kelly and I make our living from dairy farming,” says Nicholls. “We rely on the cheque on the 20th of the month. It’s absolutely paramount for us.

“Sure, I’m no longer in the shed milking cows but I used to be. I still understand exactly what’s going-on on our properties right now. I’m very clear on our processes, our achievements, our strategy moving forward.”

Nicholls emphasises his track record of success in growing the business from small beginnings.

The couple started in Wairarapa where they converted a property with seed capital from his parents.

“Wairarapa was a really hard place to farm. You only ever made money one in every three years without irrigation water and it taught us a lot of lessons. The second year in, our advisers were telling us to not continue this journey.”

Nicholls said a Rabobank executive development programme for primary producers (EDPPP) course had opened his eyes to the opportunities in strategic thinking, driving cash out of a business, making growth plans and identifying goals.

“That was quite a turning point for me, and at that stage we started to employ key people in our business to enable us to do what we do.”

But he strongly rejects the label ‘corporate farmer’.

Nicholls calls Fonterra a good company, but not a great company, marred by poor investment decisions.

His children and his friends’ children all ask ‘why invest in Fonterra?’ and he wanted them to ask ‘why not?’

“We’ve got to be an intergenerational company, a strong Fonterra protects our investment as dairy farmers and supports  the country too.”

Nicholls says Fonterra’s success is paramount for the success of the dairy industry but its strategy stalled on the goal of a 30 billion litre milk pool by 2025.

“When you read the accounts you’re still unsure if growing the milk pools is increasing the EBIT line. It’s hard to see at this point in time.

“Again, I keep saying that to drive financial performance we’ve got to drive cash generation in this business and that might mean right-sizing our cost structure.”

Nicholls said that farmers had been through two periods -- the 2009 global financial crisis and the 2015 $3.90 milk price – when they had to rip into their cost structures to survive. Rylib’s first priority was to look after its people but they were ruthless on everything else.

“But I do wonder if Fonterra’s had that element of oversight.”

Nicholls served on the Fonterra shareholders council for three years, which he said gave him a huge insight into the business and connection with key people in the leadership team.

Nicholls said his aim would be to make sure Fonterra was focussed on driving cash generation in the business, being very conscious of spending shareholders dollars and getting a return from them.

“We’ve had shareholder wealth eroded so we need to improve that and that may take a bit of time.”

Nicholls is not in favour of splitting Fonterra between its commodity and consumer arms.

“With our consumer business, the real question is how we can extract the most value.  For now I think there is more [upside/potential to generate cash] by lifting it from being an average business to a really good business.”

Fonterra’s board is flagging a number of key changes to its proposed new capital structure following farmer feedback.