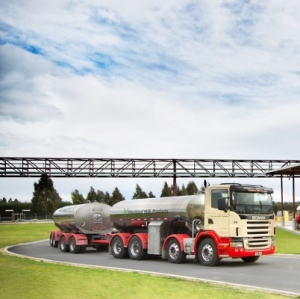 Hokitika-based Westland Milk Products says its tankers brought in a little over four million litres of milk on October 31.

In spite of a wet and cold season on the West Coast, Westland's shareholders pulled out all the stops to lift production by more than 5% last year. By November 29, shareholders had sent 335 million litres of raw milk to the company's plants in Hokitika and Rolleston, with several months of the season still to go.

Coast-based shareholders produced a 3% increase on this time last year and their Canterbury shareholders are up by more than 14%.

Westland chief executive Rod Quin says the record production continues a series of record years for Westland and is a credit to shareholders on both sides of the Alps.

"Weather plays a big part in production figures," Quin says, "but so does farm management practices and our shareholders have shown that they are right up there in terms of efficiency and herd management."

Quin says that the peak flows stretched Westland's current processing capacity to the limit and he looked forward to the new dryer seven at Hokitika coming on stream for next season and the UHT plant in Rolleston following shortly after that. The new plant will enable Westland to process more higher-value products even through the season's peak when, traditionally, the company has had to focus on lower value bulk milk powder production to get the volumes through.

He noted that, in spite of the current glut of supply on the world dairy markets, he was not expecting Westland to have any difficulty on-selling the record production, with as much as possible being funnelled into added-value nutritional products for which the market remains strong.