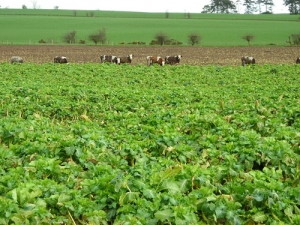 That's what University of Waikato second-year PhD student Sheree Balvert hopes to find out and recently landed a $10,000 scholarship to aid her research.

Sheree has been awarded the 2016 Pukehou Pouto Scholarship, which is awarded annually to students from any New Zealand university for postgraduate study in either agricultural science or silvicultural (forestry) science.

Sheree is researching negative agricultural impacts on the environment, which include water quality and greenhouse gas emissions.

"Cows are inefficient feeders with 70-95% of the nitrogen they eat being excreted in their waste," she says. "The concentrated urine patches that are deposited onto the ground contain more nitrogen than the plants and microbes in the soil can process, and the excess nitrogen is lost as nitrous oxide gas or as nitrate leaching out of the soil."

Sheree is researching the impact of feed change in cows, whether feeding them forage brassicas such as turnips, swedes and kale affects the nitrogen cycle and could reduce nitrogen loss in agricultural systems such as dairy or dry-stock farms.

"How and why this could work is what I'm trying to figure out," she says.

Sheree is supervised by Professor Louis Schipper at the University of Waikato and Dr Jiafa Luo at AgResearch. Her research is funded by the New Zealand Agricultural Greenhouse Gas Research Centre (NZAGRC) and the Pastoral Greenhouse Gas Research Consortium (PGGRC). Her stipend is also provided by NZAGRC. In 2015, Sheree was one of 10 finalists in the University's Three Minute Thesis Competition.