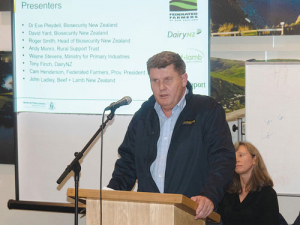 The man heading MPI’s response to Mycoplasma bovis says more decisions will now be made at a local level rather than referring every matter back to MPI in Wellington.

However, decisions on whether to cull an infected herd will still be made at MPI headquarters.

With the decision made to eradicate M. bovis, chief operations officer and head of Biosecurity New Zealand, Roger Smith visited Ashburton to find out at first hand the issues in MPI’s response that were frustrating farmers. He intended to meet farmers and his staff to learn what MPI is doing well and what it could do better.

He says with the decision to eradicate M. bovis, the nature of MPI’s response will be streamlined in a timely review of the ministry’s processes and procedures.

It’s the sort of thing any business would do, he said.

“The main roadblock as far as farmers were concerned was the need for MPI to make decisions faster and at a local level, [for example]: when can a farmer whose animals have been culled get new stock back on the property; or a farmer getting permission to graze animals alongside the road or getting in feed.

“These smaller operational decisions take some of the stress off the farmers and at Ashburton I have put in two senior MPI staff to deal with such matters,” Smith says.

But he says decisions on whether a herd will be culled will still be made in Wellington where MPI has its laboratory and specialist staff to deal with major issues.

He notes that until the decision was made to eradicate M. bovis, there was lot of angst among farmers over the uncertainty they were facing.

“Now that we have a decision, everyone has to be game-ready so we can help them. That means the meat processing plants, the trucking companies and the feed suppliers all have to be ready; there are a lot of logistics to be sorted out.

“Of the farmers I have talked to, many are concerned about the future and what this all means and obviously those who are directly affected have special concerns.”

To help farmers cope with M. bovis, MPI is quickly recruiting and training more people. The next week will see an additional 50 staff in the field nationwide. These will be ‘farmer facing staff’ – people who understand what a farm plan is all about and how a farm works.

“We need experienced people who can relate to farmers, not kids out of school,” Smith says.

He points out that the eradication programme now has industry buy-in and he expects them to start playing a bigger role.

“It is their members, their suppliers, their cooperative owners, their levy papers; so we expect to see industry right at the centre of everything we are doing.”

Smith says he was very disappointed with some media coverage in recent weeks which pitted farmers against farmers. There were reports of bullying of children of farmers whose properties were confirmed as having M. bovis, and angst between neighbours. And he says it’s time to stop bickering about whether or not to eradicate the disease.

“Everybody knows what the decision is. Now is the time for farming and rural communities to do what they are good at -- rally around their mates.”

Smith says he has picked up from farmers that there will be no more cash sales of calves; farmers agree this must end now.