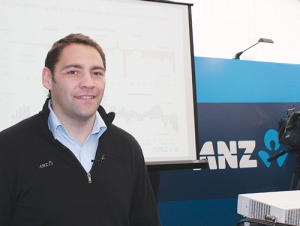 Banks have cut their farmgate milk price forecast after another drop in the GDT price index last week, albeit minor at an overall 1.4%.

While Fonterra is widely tipped to drop its current $4.60/kgMS forecast, ASB remains optimistic about next season with a forecast $6.50/kgMS while Westpac is tipping $5.20/kgMS next season.

Emma Higgins, research analyst, Rabobank, told Dairy News another lacklustre GDT result was disappointing, yet not unexpected, and could have been worse.

“Demand growth in emerging markets for powders remains modest and robust milk supply is still flowing out of Europe.

“Unfortunately, global dynamics driving current prices remain bearish until the second half of 2016.  These fundamentals are particularly reliant on milk supply growth in Europe slowing, which we expect see in the latter half of this year.”

ANZ’s Con Williams says while they expect Fonterra to drop the milk price there could be a slight offset from a higher dividend due to a lower milk cost and smaller proportion of earnings being retained.

Nevertheless cashflow pressures on farmers will be maintained at least into at least early 2017, he says.

The price weakness in whole milk powder is concentrated in the near-term (highest volume contract). The last contract period for WMP actually saw prices rise 9.1% highlighting the reduction in offered volumes from December is applying some price pressure.

“However, these reductions were premised on a tough second half of the season for milk supply,” he says.

“Recent rainfall across many areas and high palm kernel imports suggests the supply outlook has improved for now, which could add additional product to GDT (or other sales channels) at some point.

“All up, New Zealand’s supply outlook into the end of the season will continue to be influential for price direction.”

The last two auctions this year have seen prices falls of about 5%.

“However, we are still positive on dairy’s long-term prospects,” he says.

“We expect the current Chinese concerns will eventually settle. Moreover, Chinese growth will continue transitioning away from industrial sectors to services over coming years. Such a move should support higher household spending, including on food.”

They are sticking with the $6.50/kgMS forecast for next season and a positive long-run view for dairy.

“Our view remains that dairy prices will move higher over 2016. NZ dairy production and exports are tightening. But with Chinese concerns likely to persist at least in the short term, the price recovery is likely to prove stop-start.”

Federated Farmers is concerned that Fonterra's forecast farmgate payout of $4.60/kg looks increasingly out of reach.

The latest GDT result is disappointing and things are looking much worse in terms of the farmgate milk price, says Federated Farmers dairy chair Andrew Hoggard.

"We have just seen Open Country Dairy drop its forecast and this result increases the likelihood Fonterra will do the same.

"It is still possible that a sudden upswing in prices could get us there, but we'd need to see some very large increases in the next couple of months to reach the $4.60/kgMS mark. Even that is a fairly poor payout for most farmers, and falling below that is just going to ramp up the pressure on the dairy industry and those that support it."

But Hoggard is urging farmers to have faith in the GDT model.

"This isn't about the system. It's economics 101. Supply is too high and demand is weak, which is keeping prices down. If Kiwi farmers want to lay the blame somewhere they should look offshore to the subsidised production that still exists in too many other countries.

"Farmers in these markets are increasing production despite the market telling them the opposite."

"Kiwi farmers need this to be addressed and for more trade deals to open up new markets and grow the overall pie. New agreements such as TPP have the potential to make a big difference over time but unfortunately they won't ease the short term pain our dairy farmers are feeling."

OPINION: High farm debt levels have cast a shadow over the Ministry for Primary Industry's positive predictions for agriculture in 2020.

The Minister of Agriculture has entered the debate on the actions of the banks labelling them as fair-weather friends.