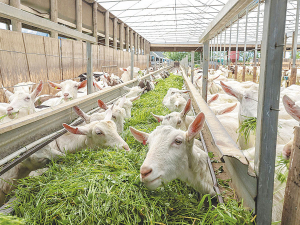 Milk payout has slumped 30% over the past three years, forcing some dairy goat farmers to sell up.

Milk payout has slumped 30% over the past three years, forcing some dairy goat farmers to sell up.

One large dairy goat farm in the Waikato was sold recently. The former owner has put 641 Saanen breed milking goats up for sale on Trade Me.

When contacted by Dairy News, the goat owner said the payout had "crashed through the roof" after infant formula sales dropped in China.

The infant formula market in China has been changing. Updated regulations governing the manufacture of infant formula in China, which has increased trust in domestically produced products, along with a falling birth rate, have led to a drop in demand for imported infant formula.

Covid-19 had only accelerated changes that had been taking place over the last two-to-three years. Sales of infant formula through the 'Daigou' channel - cross border trading by visitors and international students from China - have also dried up over the past three years.

Schuler says everyone is working hard on farm, at the company level (NZ Dairy Goat Co-operative), and at board level.

He referred Dairy News to the co-operative for comments.

"We haven't completed our current trading year or announced a final season payout to shareholders."

Taranaki based former dairy goat breeding consultant, Debbie Crump believes the industry has "gone to hell in a hand cart".

"Many have only been able to keep their heads above their water via the export of excess animals.

"There have been larger commercial producers who have also shared that they have felt the pinch of reduced quotas and lower payouts, combined with rising costs of production and compliance."

Crump claims that from the 90s where a robust, youthful industry saw breeders and early commercial herds working together, there is now a massive disconnect between players.

The genetic quality of dairy goats today, compared to back then, has gone downhill big time, she says.

"There needs to be an independent body of properly qualified individuals, who can identify the wants and needs across the industry spectrum, and develop an evaluation system along with collating information that can be fed back to industry players at all levels, for positive improvements in the national herd.

"This organisation must be totally independent of any dairy cow organisation, breed association, supply chain, import/export or semen company to be truly non biased and independent in its role.

"There is a desperate need for qualified new blood: a lot of dead wood in positions of power at various levels.

"Too many chiefs and not enough Indians along with a distinct lack of foresight and vision for the future, are all contributing to holding any marked progress across the board, back."

High quality milk replacers are crucial if you are preparing to rear lambs or goat kids in the upcoming season, according to Milligans Feeds.