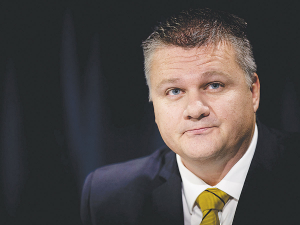 The forecast of $6.30-$6.40/kgMS still stands but will be finalised when books close in September. The $6.25-$7.25/kgMS forecast for the current season remains unchanged.

Farmers will rightly be frustrated and disappointed by Fonterra’s writedowns, says Hurrell. These total $820-860 million for the year ending July 31, 2019.

“They do not in any way impact on our ability to continue to operate. These are important accounting adjustments that Fonterra needed to make.

“Our cashflow has remained strong, our debt has reduced and the underlying performance of the business is in range of our earnings guidance of 10-15 cents per share.

“The business units at the heart of our new strategy are delivering for us and we look forward to discussing our strategy and performance with our owners in September.”

The fundamentals of the business are still strong, he says. The co-op’s capital spending plans for this year are well under its original target and will not exceed $650m. This is well below the billion dollar average capital spend for the last five years.

“We have announced our operating expenses will be below 2017 levels in a couple of years and we are on track for that. We are making good progress on the asset sales we have previously announced.”

Improved cashflow and reduced debt are stories farmers will be pleased to hear, he says. The co-op has signalled to its farmer shareholders that it will take some time to get the business into shape.

Chief financial officer Marc Rivers says the level of debt will be reduced this year but the final number will come with the final results in September. Hefty reduction in debt levels will result from good progress on asset sales and lower capital and operating expenditure.

It will take a couple of seasons to get the balance sheet into the required state, Rivers says.

“The core of the business is doing very well and we have pockets that are extremely attractive businesses.” If they keep working on those and delivering they will have good results next year, he says.

In its capital structure Hurrell says Fonterra will remain a cooperative and farmer owned.

“Outside of that the board has been open to discussing what is right for the ongoing business in the long term. But it hasn’t gone further at this point, and the board has just kicked off that discussion now.”

This applies across the board from liquid milk to high spec cheese.

“It is a very competitive market here in NZ as seen in the retail shelves when you visit the supermarkets now.”

Future earnings are being reassessed in the NZ consumer business because of the compounding effect of operational challenges, and the slower than expected recovery in market share, Fonterra says.

The business is being rebuilt and Tip Top is sold. The combined impact is a writedown of about $200 million.

Hurrell refers to supply chain operational issues seen over the last couple of years as new systems have come on stream.

“But it is about the trajectory. While we have made progress, the trajectory has not been good enough to sustain the value we had until now so there’s a need to adjust that.”