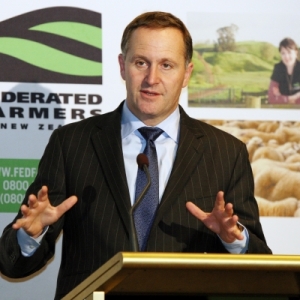 He will emphasise the strength of New Zealand's food safety systems.

Key will travel to China, Hong Kong and The Netherlands as part of a visit focusing on trade and economic opportunities and to attend the Nuclear Security Summit in The Hague on March 24-25. He will depart New Zealand for China on March 17.

In Beijing, Key is scheduled to meet both President Xi Jinping and Premier Li Keqiang.

The visit will focus on increasing agriculture and food safety cooperation, financial sector cooperation, as well as building on the strong bilateral trade, economic and political relationship.

"My visit provides an opportunity to brief China's leaders on the outcomes of the Government Inquiry into the whey protein concentrate contamination incident. I will be able to report to China's political leadership, and assure Chinese consumers, that the Inquiry delivered a strong endorsement of the New Zealand food safety system," says Key.

New Zealand and China are on track to achieving the shared goal of doubling two-way trade to NZ$20 billion by 2015. In 2013, total two way trade with China reached $18.2 billion, an increase of over 25 per cent on the previous year.

Following his visit to China and Hong Kong, Key will attend the third Nuclear Security Summit in The Hague, a high level process which aims to improve the security of nuclear materials and reduce the global threat from nuclear terrorism.

Key attended the first Nuclear Security Summit in Washington, DC in 2010 at the invitation of President Obama, and he also attended the second Summit in Seoul in March 2012.

"Preventing nuclear terrorism is a global challenge which all countries must address together. New Zealand's long-standing concerns about nuclear issues are well known and we will continue to play our part in this effort," says Key.

Key also plans to use the opportunity to have a number of bilateral meetings with some of the leaders of the 52 other countries invited to the Summit. He returns to New Zealand on March 28.