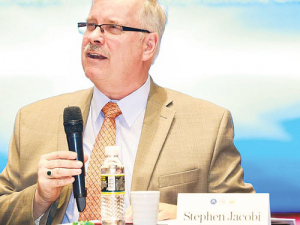 The government and the Labour Party should reach a bipartisan consensus on how to roll out the current Trans Pacific Partnership process, says trade expert Stephen Jacobi.

Negotiations are at a “delicate” stage.

“This is too serious for New Zealand to just leave to domestic politics in my view. That’s why we like bipartisanship,” Jacobi, executive director of the NZ International Business Forum, told Dairy News.

“We have an opportunity potentially to conclude the Trans Pacific Partnership before the end of the year among the 11 remaining parties, excluding the United State which has pulled out.

Jacobi says if we reopen negotiations, other countries will come up with different issues and “we will see a repeat of the eight years of negotiation we just spent trying to get TPP right. That’s the risk.

“Of course at this stage it is hard to say whether others will want to reopen negotiation. It is conceivable they might. It would be particularly damaging if the market aspects got reopened because that was a very delicately balanced exercise.

“For those reasons we would rather stay with TPP as it is at the moment.

“As you know the risk for us is if we don’t get TPP through we will be seriously squeezed in the Japanese market.”

The outcome for dairy wasn’t as strong in the TPP as it was for beef but nevertheless the same conditions will apply, say Jacobi.

“Over time Australia and the European Union would steal a march on us.”

That would apply to many products including dairy, and horticulture, wine and wood would also be exposed.

“The real gains from TPP came to us from Japan in the end, not from the United States,” says Jacobi. “It’s Japan we don’t have an FTA with; it is the only country in Asia we don’t have one with now.

“A lot rides on getting TPP through and things are very delicate at the moment. Calling for renegotiation is not a straightforward exercise and I don’t know that New Zealanders would be very well served to be the ones calling for it.”

“But the Japanese are the key in this. They have put a lot of emphasis on this agreement for their own domestic restructuring so they clearly are not wanting to waste all that effort and that of course encourages other people to stay on board as well.

“Things are delicate. There’s been a meeting last month in Japan, there’s another one coming up next month in Australia. It is all around the time of the election.”

That is why Jacobi says a bipartisan agreement between the two major parties is needed.

The Cabinet has formally approved a negotiating mandate for the TPP 11.