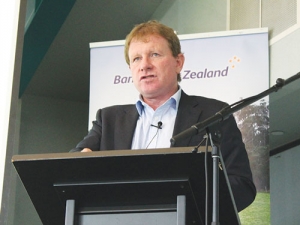 "The general view is that while we had thought prices would be moving north over the next three or four months, as you heard us say in January, unfortunately we think that will be later in 2016," Wilson told the Northland Dairy Development Trust annual meeting last week.

"It is impossible to put a day on it, let alone a month so the reality is we will continue to update you."

But he says Fonterra and its global peers believe future prices will show the market is not as imbalanced as current prices indicate.

"Obviously these are very, very challenging times for everyone," he told the big turnout of farmers. "What we are seeing on farms is difficult for us, as farmers, and of course particularly those sharemilkers, the lower order sharemilkers.

"We have talked a lot in the past about how volatile our industry is and unfortunately we are seeing the bottom end of it at the moment."

Referring to the global situation he said there was, frankly, no certainty. "But we will continue to give you the best information we can," he told the meeting of about 160 farmers.

World milk production is responding to the price signals everywhere but Europe, he said. "Virtually all farmers in Europe are not making money on a cash basis but they have invested significantly in facilities and are using them."

The view is that European production will decline. "We are just not sure when and frankly I think it will require a weather event to give a sharp signal to the market."

Fonterra sees strong demand globally but is concerned about world economies. The current low milk prices have been created by an excess amount of supply in the market, the customers are aware of that and therefore the price point is dropping.

"We don't believe, and neither do our peers globally, that the market is as imbalanced as the price is indicating right now. The prices are also an indication of global financial fragility generally... also reflected in oil."

An influence on the market is New Zealand milk supply. Fonterra had previously forecast supply would be 5-6% down following work done over spring in conjunction with DairyNZ, looking at the significant culling that had occurred, and the possibility of drought on the North Island East Coast.

"We have seen farmers producing a lot of milk even with a lower stocking rate which is good because it has been relatively low cost milk and in reasonable weather conditions," Wilson said.

"There have been pockets of dryness around the country but general speaking we've seen relatively favourable conditions over the last three-four months.

"My personal view is that we will see quite different autumn production this year. There are clearly lower stocking rates and there will most likely be a lot less supplement fed so it is likely we will see an autumn that will drop down lower than it has historically. But much will depend on the weather."

Currently Fonterra is forecasting 4-6% down; it is now tracking at 4% down. "For the last three weeks – for the first time this year – we have been ahead of last year day-on-day: just three weeks," he said.

"But already in the last week we have started to tip the other way again."

Commenting on last week's GDT in which the price index fell 2.8% and whole milk powder fell about 3.7%, he said "because of what I've talked about we had expected it to bounce around at these levels. It is clearly near a floor or at a floor because of where intervention pricing is in Europe.

"However we can't be 100% sure when the market is going to get the very clear understanding and signal that over the coming six months it will be demand driven rather than supply driven."

Farmers are urging banks to take a long term view of their businesses, now under growing pressure to improve their balance sheets.

Thanks John, for the milk price!