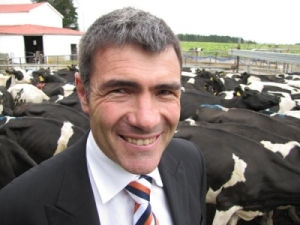 A new programme celebrating and promoting careers in the primary sector has been launched by Prime Minister John Key, Primary Industries Minister Nathan Guy and senior Ministers at National Fieldays.

"Growing Our Future – Primary Industry Champions is a series of videos with well-known and everyday New Zealanders working in the primary sector. The first video includes Richie McCaw, Sir David Fagan, and Rob and Sonia Waddell, among many others," says Guy.

"The aim is to raise awareness of the huge range of exciting careers in the primary sector, their importance to New Zealand, and encourage young people to consider a career in this broad field.

"The primary sector is still a major part of the New Zealand economy, but we face big challenges in attracting enough young people into the sector. By 2025 the sector will need 50,000 more people, and around half of them will require a Level 4 NCEA qualification or higher.

"As part of this initiative, the Ministry for Primary Industries will be releasing a series of short videos featuring everyday primary industry champions including farmers, growers, fishers, foresters, scientists, economists, rural consultants, entrepreneurs and marketing specialists.

"This is part of a range of initiatives from both Government and the wider industry who are working together on a range of programmes to raise awareness of the opportunities out there."

As part of the launch, the Prime Minister also announced the two winners – Bruce Hunter and Daniel Boulton – of the Emerging Leaders Scholarship for the 2016 Te Hono Movement Stanford Bootcamp in Palo Alto, California. Sponsors for the inaugural scholarship include MPI, AGMARDT (The Agricultural and Marketing Research and Development Trust), and Te Hono Movement.

Te Hono Movement's vision is to accelerate the transformation of the primary sector with a focus on doubling the value of primary sector exports by 2025. The group comprises diverse alumni of more than 130 chief executives and leaders, representing 80% of the New Zealand primary sector.

The first videos as part of the Growing Our Future – Primary Industry Champions initiative are available at http://www.mpi.govt.nz/funding-and-programmes/other-programmes/future-skills/growing-our-future/