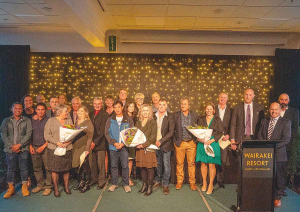 Miraka’s cream of the crop.

Speaking at a special ceremony to recognise its top farmer suppliers, those who have met additional goals in the way they farm and in the quality of their milk they produce, under a scheme known as Te Ara Miraka (The Miraka way).

This means farmers applying environmentally sound practices to create climate resilient farms that produce some of the highest quality milk in the world.

Within these there are 31 standards of which 13 are mandatory for farmers to meet. These in turn are extrapolated out into a points system – 100 all told. If a supplier passes the mandatory measures, they get some sort of incentive, but if they get the full 100 points they will get the extra 20c/kgMS at the end of the season. This is pro-rated down depending on how many points a farmer gets.

This year, 18 farms achieved a score or 90% or more and five farms a score of 100%. This is twice the number of farms that have achieved this score since the scheme was initiated four years ago.

“The Te Ara Miraka framework is good as it keeps you on your toes,” he says. “It incentivises you to keep striving and stay focused right through the season, and new measures are added each year. Miraka’s approach aligns well with our own philosophy on our farm.”

Chamberlin believes that if you look after the land and the animals, they will look after you.

Papatangi is one of five farms owned by the Te Raparahi Lands Trust. All five farms achieved an excellence score of 90% or above this season. Phillip Samuels says his trust is really proud to be suppliers to Miraka.

“They are proactive to deal with and have a genuinely personal approach,” he says.

“We never feel like we are being held back – Miraka encourages us to be innovative, to get out there and make things happen.”

Miraka's general manager of milk supply, Grant Jackson says the aim of Te Ara Miraka is to get famers to raise the bar.

He says the goal is to make farmers strive for excellence in a wide range of areas including – animal welfare, sustainable land management and supporting staff.

“This is about more than just meeting regulations, it’s to show what’s possible and to become true leaders in the industry.”

Jackson says Te Ara Miraka is a dynamic programme. He says the pillars and criteria on which it was initially based will change so that farmers are incentivised to meet the new needs of consumers.

Jackson adds that Miraka stays in close touch with its markets and food safety is now a given. However, he says consumers are now looking closely at the environmental and social aspects of food production.

He says Te Ara Miraka is based on real data and consumers can have confidence in claims the company is making in terms of its products.

“It provides credibility. We have independent assessments that are ISO accredited and we validate that through our data bases and our GIS spatial mapping to state exactly what is happening on farm.”