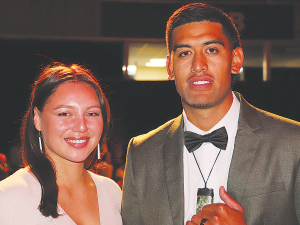 Morgan is in his first season of farming working as a farm assistant for Sam and Kate Moore on their 155ha farm in Otakiri near Whakatane, where they milk 570 cross breed cows.

Māori Trustee and Te Tumu Paeroa chief executive, Dr Charlotte Severne, announced Morgan’s win at the Ahuwhenua Trophy awards dinner in New Plymouth this month. Around 800 guests attended the function including the Minister of Māori Development Willie Jackson, Minister of Agriculture Damien O’Connor and other dignitaries including the Māori king, politicians, agribusiness leaders and whanau and supporters of the three finalists in the competition. The other two finalist were Anahera Hale, 26, who is currently working as the 2IC farm assistant on Rod and Jackie McPherson’s dairy farm near Whakatane, and Ben Purua, who is the 2IC for a contract milker at Trinity Lands farm, near Tokoroa in the South Waikato.

Morgan told Dairy News he felt great and humbled at winning the award. He says not everyone gets such a good start as he did, especially getting such good employers. He says it’s been a big day and week for him and his wife Samantha and he’s grateful for the opportunities.

Morgan was born in Taumaranui, lived in Tongariro National Park before moving to Whanganui where he went to primary and intermediate schools and in 2007 he moved with his mother, stepfather and sister to Australia where the family sought out a new life. While in Australia he was involved in the fitness industry, working full time with at a gym in Perth. It was there he and his wife Samantha had their three children.

His farming career began when some of his relations offered him some work experience. That’s when he fell in love with the dairy sector and that led to him being employed full time as a farm assistant with the Moore’s. He says he always wanted a career that would involve his wife and family and dairying has done just that.

“The dairy lifestyle suits me, especially being home for breakfast and seeing the kids head off to school. I like the early morning starts and the hard work. Working in the dairy industry is a real treat and as a young father it has given me stability and helped me and my wife develop great aspirations as a collective,” he says.

Since then he’s completed day courses such as calving smart with DairyNZ, first aid for cattle with Bayvets and a lameness course with Dairy Hoofcare Institute. Morgan is currently wrapping up his Level 3 with Primary ITO.

Quinn Morgan's wife Samantha says it was awesome to see here husband shine in the dairy industry. Like other wives and supporters of the other finalists she was in New Plymouth for the final part of the judging of the competition. This saw the finalists take part in a study tour and meet agribusiness and Māori leaders.

Samantha says they have done a lot of work in the past week and she says she was in tears for much of the time.

"No words can describe how happy I am to see him up on stage and pronounced the winner," she says.