Raw milk home deliveries ‘back to the 1950s’ 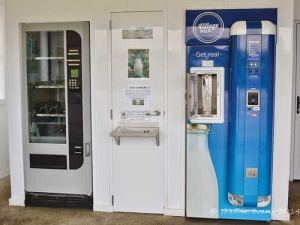 Raw milk buyers may need to write down their name, contact details and amount of milk they purchase each time.

It would be a step backwards to the 1950s if raw milk has to be delivered to homes instead of to collection points in the cities, says Raw Milk Producers Association of NZ chairman Ray Ridings.

“We are right behind the Government in getting a new form of (raw milk) regulation in and the majority of the new policy is quite workable,” he told Dairy News. “But the total banning of collection depots for some parts of the country will make it impossible for some people to get access to milk.

“We don’t want to be adding more vehicles to the roads. With a lot of city folk, everyone is away for the day so when can the milk be delivered safely?”

A large percentage of current sales by the association’s 40-odd members are in cities, mainly Auckland, Wellington and Christchurch. He says he understands the Government’s concern about sales in retail outlets but if the Government had come back to them they could have offered solutions. There are collection depots on private properties and ways of making them secure etc, to get away from the retail aspect.

Riding says they are waiting to see the fine detail still being written. Food Safety Minister Jo Goodhew announced the new policies and gave a broad outline mid-June. “The way the minister has written the Cabinet paper the policies appear non-negotiable,” he says. The association wants discussions with MPI on achieving the best policy possible.”

He believes some farmers will get out of raw milk sales because of extra costs. Individual members are looking at how to work with the regulations but more clarification is needed from a farm and customer point of view.

The 100% recording provision for raw milk sales will be virtually impossible for one type of sale – the vending machine. “What other food group requires 100% recording of all sales and for those records to be kept for four years?” Ridings asks. A recent serious listeria outbreak in herbs was handled by just a general recall.

For pre-ordered sales of raw milk most farmers will have 100% recording, but for vending machines, depending on their location in, say, tourist type areas or on main roads, the possibility of recording all sales could vary from 50% to 99%.

“There are a few little areas but on the whole a lot of the policy will be workable. But the amount of raw milk available when it comes into effect will probably be reduced because some farmers may decide the extra expense to comply isn’t worth it at this stage of their farming career or for other reasons.

“We want to be treated like other foods but we see some aspects of the legislation as being quite different from other foods – like the 100% recording.”

They also want improved reporting of illnesses by health boards in communicable diseases. A large percentage of illness attributed to raw milk was caused by something else, Ridings believes. In Timaru in March 2014 seven illnesses from campylobacter were blamed on raw milk yet there were 60 other campylobacter illnesses in the same period. The raw milk tested negative all the way through.

“That is just one example; whenever raw milk is involved, it gets the blame. It is a bit like blaming all Ford motor vehicles for every crash involving a Ford motor vehicle,” he says. Health board misreporting builds the ‘evidence’ against raw milk.

The association wants to present the minister and MPI with a better case for raw milk over the next couple of years. “We have some farms doing some excellent work out there testing more regularly than they need to and getting exceptional results, far better than food already on the shelf. We want to be able to prove raw milk is not the demon it is made out to be.”

Some aspects in the technical details released by the minister are already applicable to all farms, including standard dairy regulations.

The new policies also say the dairy farmers will be exempt a regulated management plan (RMP) for the raw milk side of the business and instead follow a regulation control system (RCS). However Riding argues that good operators should be rewarded by being allowed to operate under an RMP which has fewer inspections and is less prescriptive.

Milk in same category as gunpowder?

Clarification is needed on whether the raw milk sales reporting requirements will be “best effort” or whether they have to be perfect, says Village Milk chief executive Mark Houston.

That will make a big difference, particularly with vending machines operated by the franchise.

He says Food Safety Minister Jo Goodhew commented at Village Milk in Timaru that only a book would be needed in which buyers would write their names.  Houston says that sounded reasonable. But often MPI comes down a lot stricter.

“There will be hell to pay if everyone who buys raw milk has to write their name, address, phone number and how many litres and what time it was and the date every time they buy some. That puts us in the same sort of realm as buying gunpowder or restricted drugs.”

But Houston says more policy information is needed before they know where they stand.

A Southland dairy farming couple offering home delivery of both raw and pasteurised milk, as well as other produce, is expanding their business as demand climbs during the COVID-19 lockdown.

Faith in raw milk to save farm

In a bid to future-proof their business, Otaki dairy farmers Andrew and Stacy Faith have just installed a raw milk vending machine.