Religion no barrier to milking cows 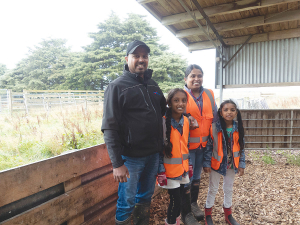 A Buddhist couple whose personal philosophy forbids them owning cows has taken out the Canterbury/North Otago Share Farmer of the Year title.

In a category which no longer requires traditional herd ownership but is instead open to anyone self-employed in a similar role, the title has gone to contract milker Ruwan Wijayasena and his wife and partner Niranjala Gamlath.

Wijayasena explained that it was not because Buddhism actually prohibited them owning or culling cows but that they believed it better not to.

“The religion itself doesn’t say ‘don’t go and buy cows’ but we believe we are better not to own cows or make the decisions about culling them,” he said.

They acted on behalf of the company that owns the animal, he said.

“We’re happy to work with the guidelines they provide us.”

“We are contract milkers. We don’t own animals but we own the team.”

The couple detailed their business model at their recent winners’ field day on Lighthouse Farm, near Hororata.

Wijayasena and Gamlath each has a B.Sc. in Agriculture Sciences from Sabaragamuwa University of Sri Lanka, where they met, Ruwan majoring in Livestock Production and Niranjala in Agri Business Management.

They came to New Zealand in 2005 when Wijayasena started work as a farm assistant on a Synlait Farms property, while Gamlath joined Synlait Farms as a farm technician in 2008.

By 2009 he was farm manager at Lighthouse.

“I have always loved being a farmer, and I was so lucky to join Synlait Farms, now Theland Farm Group, who shared my desire to implement best farm practices towards sustainability of dairy farming,” said Wijayasena.

In 2012 the couple formed their own company, DDSM Farms Ltd, to run the 262ha Lighthouse on a contract milking basis.

The farms run 950 cows each, providing A2 milk to Synlait, with Lead With Pride accreditation.

The DDSM business now also includes rental properties and a motel in Christchurch, which Gamlath manages.

Wijayasena said their Buddhist culture meant self-awareness, self-management and self-discipline was in their nature.

“You can’t control tomorrow, that hasn’t happened yet. You can control right now.”

He said it was a simple day-to-day philosophy that allowed a life of less worry.

“It’s hard work. You work in the mud and the rain and the cold but that’s why you chose it, yeah?”  he said to laughter among the attendees at the field day, held in cold wet weather.

They had a focus on learning. He listed a combined total of more than 20 various training courses they have undertaken since coming to New Zealand.

Everything they do on farm they do positively, he said.

An example was the adoption of heat detection cameras and AI for the whole 11 weeks of mating.

“Any new challenges that come to the farm, we take it.”

Wijayasena said that despite the religious barrier to owning cows or making decisions to kill them, they had found a way to grow their business without following the traditional footsteps.

Their goals include expanding the contract milking business.

“I am not planning to become 50/50 sharemilker and then a farm owner.  I can prove that there are other ways to grow than the traditional ladder and wish to share my knowledge with the industry.”

Two brothers who moved from India to make a career in New Zealand agriculture sector have created history by winning the 2021 New Zealand Share Farmers of the Year title.

A former police officer has taken out the 2021 Northland Dairy Industry Awards Share Farmer of the Year title.

Sharemilkers and equity partners Ralph and Fleur Tompsett are Canterbury/North Otago’s Share Farmer of the Year.