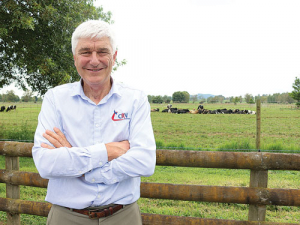 CRV Ambreed scientist Phil Beatson is being credited for the genetic discovery that could help reduce nitrogen leaching on New Zealand farms by 20% within 20 years.

For five years CRV Ambreed has investigated what could be done with genetics to reduce the amount of nitrogen excreted as urine.

Nitrogen taken in by cows in their diet is converted into milk protein (+ urea), growth (muscle is protein), dung, gases and urine.

“From an environmental perspective, we saw urine as being the big issue because of its impact on water quality,” Beatson says.

Now the company says it will market semen from 20 high-performing bulls under the LowN Sires brand. These bulls are said to be desirable for traditional traits, and genetically superior in their ability to reduce concentration of milk urea nitrogen (MUN) in their daughters. (MUN is a measure of the amount of nitrogen contained as milk urea.)

Beatson says there’s strong international evidence of a direct connection between MUN and the amount of nitrogen excreted in urine when cows are fed varying diets. Cows with low MUN excrete less nitrogen as urine.

Beatson and colleagues have investigated the genetics of MUN, theorising that if it’s possible to reduce MUN through traditional genetic selection means, and providing the relationship between MUN and the amount of nitrogen excreted in urine holds, then the genetically improved animals for MUN will excrete less urinary nitrogen and hence leaching per animal and per hectare can be reduced.

“Cows bred for lower levels of MUN are expected to excrete less nitrogen in their urine which will, in turn, reduce the amount of nitrogen leached from grazed pasture,” he says.

“It could save NZ 10 million kilograms in nitrogen leaching a year within 10 years, based on the national herd number of 6.5 million dairy cattle. Modelling suggests that farmers who start a breeding programme for low-MUN now could reduce nitrogen leaching by 10-12% by 2025.”

The primary cause of nitrogen leached into the ground and waterways comes from the cow’s urine being concentrated in relatively small patches. Some of the nitrogen excreted is converted to gas, some is taken up by plants and a substantial amount is leached, with soil type affecting the proportion that is leached.

CRV Ambreed says international research shows the link between MUN and lower nitrogen output in urine. And other genetic studies have found that MUN is a heritable trait and have even stated that it is possible to reduce MUN through genetic selection. But that avenue has not been pursued overseas, where alternative farming systems mean cows are not on pasture as much as they are in NZ and nitrogen leaching is possibly not as important an issue as it is here.

Beatson’s research was designed to identify superior bulls for MUN with the specific aim being to provide low-MUN bulls to breed cows that excreted less nitrogen in their urine; in line with overseas studies he has identified some bulls that will breed daughters that have desired low levels of MUN, while at the other end of the scale some bulls will breed daughters with high levels of MUN.

Along with the research now being done in NZ to mitigate nitrogen leaching, it makes sense to breed cows with lower MUN for economic and environmental reasons, he says.

“We know farmers are doing everything they can to mitigate nitrogen leaching and meet environmental compliance levels…. The genetic approach has an additive effect to other strategies a farmer might be taking to reduce nitrogen leaching. CRV Ambreed [offers] a long-term solution that fits within the standard AI mating programme.”