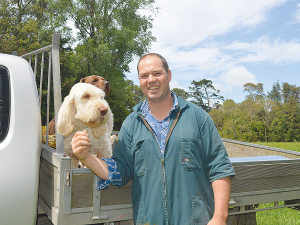 He says farmers are now seeing "a much nimbler business".

"Management was able to fully utilise our co-op's scale and diversification by shifting milk into the markets, categories and product lines that were the most profitable in the Covid-19 environment."

Fonterra last month announced a net profit of $599 million and a long-term growth plan that includes pulling out of global milk pools and working on adding value to New Zealand milk.

Barron noted that the results are largely in line with the three-year targets announced in 2019, and show the co-op can deliver healthy earnings and a strong milk price.

He says that the dividend payment of 20c/share is evidence of the improved business performance and notes that debt has significantly reduced and is now at a comfortable level.

Barron acknowledged the hard work that Fonterra chief executive Miles Hurrell and his team had put in to achieve the results, but noted that there was still more work to do around return on capital.

"Council has been hearing members asking for this forward outlook, and we commend the board and management for responding with it," Barron says.

"We understand from our independent analyst Northington Partners that the level of transparency provided is high and relatively rare in the New Zealand context."

The council's annual report, out later this month, will contain more detailed analysis and commentary on the co-op's performance and projections.