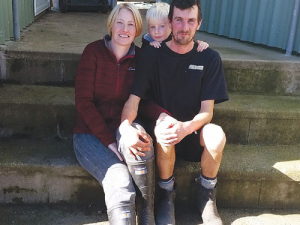 Will and Kirsten Rolton with son George.

He started in the UK dairy industry but got demoralised by the lack of a future. So he emigrated to New Zealand in 2010 after a friend told him he could progress there in dairying.

“Within two months in NZ, people were saying ‘stick around and we will make sure you get a shot at a percent return or something’, so that was exciting.”

Steady progress has seen him first working on a 3500-cow farm in Maniototo (where he met Kirsten), to contract milking for a Morrinsville sharemilker for three seasons, then finally buying a herd and getting a sharemilking contract.

“Those first two seasons in NZ I got a lot of freedom,” says Rolton. “I learnt the trade: pasture, breeding and how it is done here, rather than in buildings.”

Roltons are now in their second season sharemilking 280 Kiwicross cows on Kees and Hannie Rombouts’ 85.5ha (eff) farm near Te Awamutu and they love the challenge.

“Contract milking was good but I wanted to go sharemilking,” says Rolton. “When you own your cows you have more in the game.

“Kees had gone from wages to ownership so we thought we would tuck under his wing for a few years and see what we could pick up from someone who has done it.”

Rombout sees similarities between the Roltons’ career path and theirs. “We started like Will, coming into the country and not having parents with a farm or help to get started.”

Hannie Rombout says people need to think outside the box to acquire a farm.

“You have to look at wider options, like other investments or ways of making the next step between sharemilking and farm ownership: maybe other land investments or finding a financial partner to help you step into buying a farm.”

Rombout says they are happy to support young people’s progress in the industry; they have two smaller herd farms run by sharemilkers.

“We appreciate having got into farming; if I had been in Holland I would never have been able to get started,” he says. “I have had my chance, and as long as there is a good relationship and it works for both parties we are happy.”

The Rombouts and Roltons believe in the value of smaller herd farms.

“A couple with children applied here for a job, saying they wanted a sharemilking job where the kids could come on the farm. It is easier for the kids to get involved as they get older on a smaller farm.”

Says Will, “There is nothing wrong with a wages job, but on wages you are only invested up to a point, and you are given your owner’s parameters to manage by. Whereas when you are contract or sharemilking you get more autonomy.

“You may not nail it for a couple of seasons, but you review and get sharper. A $2000 cow dying is your loss, rather than a $50 bonus. You get better in your skill levels.”

Rombout says if the smaller herd channel to owning a herd or a farm closes, the industry will lose skills.

“On the bigger farms you must have key decision makers; one man can only go so far. You can miss a woody tongue cow and it is a week before someone has found her; it is not because she is showing anything, she has had a week to get thin.

“When you are sub-300 you can see every cow every day; a lot of that higher level attention comes through and your average picks up.

“We still have time to pick up a few feet and trim them, even at the busy time of the year. When you are finishing your morning routine at 1pm those small things don’t happen.

“During the downturn we have survived when a lot of big operators would have gone out of business,” says Kirsten.

The Rombouts and the Roltons regularly attend SMASH events and appreciate the quality information they get there. They have learned and made worthwhile changes as a result.

“I went to a SMASH event at Karapiro where three big chunks of information were presented that we were interested in,” says Will. “There’s your information in three hours, all done.”

He says that prompted a fresh look at his heifer rearing, a change of grazier and a start in once-a-day milking.

“On OAD our condition score and our lifestyle in summer have improved. You don’t lose production and you can feed the cows better.”

• Louise Hanlon is a committee member of SMASH.

Together with mastitis and infertility, lameness is one of the big three problems on many farms, says vet Neil Chesterton.