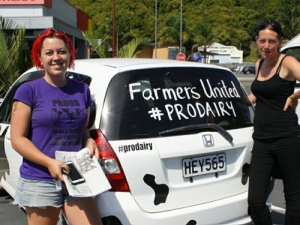 A Facebook page is shedding light on bullied dairy farmers.

Gina Greenwood, creator of the page, says dairy farmers are being told to kill themselves and are being spat at and yelled at in the streets.

She says farmers, including herself have been receiving multiple messages from SAFE supporters and vegans encouraging them to commit suicide to save the animals.

"An average of 28 farmers a year commit suicide as it is. These messages are disgusting and not helping at all." says Greenwood.

Greenwood is asking those concerned to like the Farmers United #prodairy Facebook page, formally known as farmers against SAFE #prodairy. Dairy farmers can also join a group with the same name to share experiences.

Greenwood is also using the page to fundraise for New Zealand dairy farmers with depression.

"We need to get it out there that SAFEs true agenda is not animal welfare. They want anything to do with animals stopped completely and want the world to go vegan. The way the are going about it is incredibly destructive to New Zealand and our economy. They have timed their attacks very well especially now the payout has dropped to $3.90."

Greenwood's next steps include taking the bullying to the media. She says last week she had an interview with a major New York newspaper. She also spoke with Government Ministers Paula Bennett and Louise Upston in Cambridge.

"This Friday I am going back to meet with Nathan Guy (Primary Industries Minister).This time the story is much more serious.

"We have been working hard signing and sharing a petition that Bridget Lowry made to remove SAFEs charitable status and it is now being reviewed after almost 11,000 people signed."

Don’t take away our livelihoods

US actor Joaquin Phoenix is being accused of taking away UK farmers’ livelihoods.