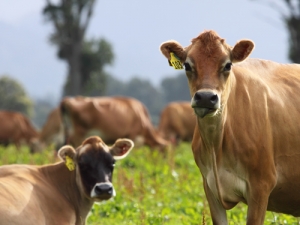 Wet conditions on the West Coast are putting pressure on farmers and cows.

The consequent risk of pugging and treading is hindering their use of available pasture, he says. And to preserve pasture, farmers are having to feed out more than they prefer because of financial stress.

Low soil temperatures are contributing to the problem, Bishop says.

“Consecutive frosts have helped with pasture utilisation because the ground was harder, but they keep soil temperatures at lower levels. Correspondingly pastures were slower to respond and it’s fair to say soil temperatures are below what we’d normally expect at this time of year. Probably  we’re two or three weeks behind where soil temperatures normally would be to be at this stage of the season.”

Bishop says the further south you go the higher the rainfall. But further north, where soils are lighter, soil temperatures should be on the rise.

The wet is hindering fertiliser spreading, Bishop says. “The difficulty is being physically [unable to] get onto paddocks without causing too much soil or pasture damage. There is little point in leaving wheel ruts in paddocks simply to get nitrogen on, so people have been strategic with their nitrogen applications.” But the low soil temperatures are limiting pasture growth as a response to the nitrogen.

Bishop says the culling of poor performing cows has continued into spring, especially those that have turned up empty or are extremely late calving.

Farmers who have exhausted options for manipulating feed supply are now looking at the other side of the ledger and are trying to manipulate stock demand, hence culling cows of low cost-effectiveness.

Time for special care of cows

The wet winter in many regions – especially Southland and the West Coast -- has prompted a DairyNZ expert on animal husbandry to warn farmers to take special care of their cows.

Nita Harding says the biggest concern is that in very wet it’s hard to get animals onto pasture without it being damaged.

Issues arise with the standard practice of grazing cows on pasture for a short time each day, then shifting them somewhere else.

“The main [question] is where are you taking them to stand and is that going to impact on, say, their ability to lie down and rest? If they are standing on concrete, sore feet and legs can occur, so managing where the cows are put and when they are off pasture is important. Sore feet can lead to lameness.

“We know that many farmers have feedpads and some have standoff pads well set up for managing cows off pasture, but if not, cows should be watched closely to make sure they’re getting adequate rest.”

Harding advises that now cows have calved and are being milked, udders and teats must be kept clean to address the risk of mastitis.

Hoof health is at risk in wet conditions so races must be well maintained.

“The surfaces cows are walking on matter more than the distance they are walking. Cows standing in a lot of mud or on poorly maintained races will [risk poor] foot health. The ideal surface is smooth, but not to the point of being slippery and  not with great big stones in it. The race should be wide enough to walk along so that cows can spread themselves out to see where to place their feet,” enabling them to avoid uneven patches and stones.

Calves should have shelter and when the weather is fine should get out into the sun.