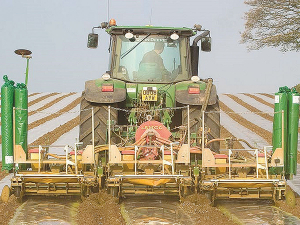 Growing maize under biodegradable plastic has been underway for a while in the UK.

Trials run by crop production specialists Hutchinsons in 2020 showed that profit margins could increase by up to $5,800 per hectare from improved crop quality and increased milk output.

Jim Clark, an agronomist at Hutchinsons, suggested that farmers should not get too hung up on fresh weight tonnages, but focus on overall feed value including dry matter and starch levels.

"Increasingly, growers in the UK use film at planting as an insurance policy, as it almost guarantees a half decent crop, regardless of weather or location," says Clark.

"Starting plants off under film is akin to planting seedlings in a glasshouse - ideal for accelerating germination, better early growth and the ability to bring forward harvesting dates, which often take place during the onset of bad weather."

Alongside an increase in quality and overall yield, the practice is also said to offer: reduced soil erosion, protection against bird strike on emerging seedlings, a more consistent crop and the opportunity, from earlier harvest, to plant another crop before heading into winter.

The agronomist suggests that a discussion is needed to understand which varieties are best suited to the technique, alongside the timing of planting that, in most cases, can be brought forwards by two to three weeks. The same applies to soil temperature, with the target for conventional planting normally around 10 degrees C, whereas crops germinated under film can be planted at around 8 degrees, as the film creates a greenhouse effect.

Clark points out that good seedbed preparation is essential with any maize crop not favouring compacted ground. Noting that maize is a "hungry" crop, he recommends a ph of 6.3 to 6.5, 10 to 15kg/ha of nitrogen in the seedbed at planting and a typical P and K requirement of 55kg and 175kg per ha respectively.

Growing under film also requires a good pre-emergence spray for weed control, so with most sprays being pendimethalin-based and effective for 3-5 weeks, there also needs to be enough moisture under the film.

In practice, the film typically lasts about seven weeks before the maize starts to push through, at which point a post-emergence spray is needed to target late germinating weeds.

Starting maize off under film obviously has increased costs over conventional planting - typically $505 hectare, made up of film at $451 and increased contractor costs.