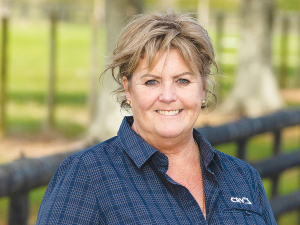 Bratty likes farmers and is thrilled to see them do well.

"If you go up the driveway of farmers and you don't believe you can make their lives better, you may as well not be there," she says.

Bratty is passionate about farmers because she's been one, albeit for a short time.

"Only for a short time, but I know how hard it is to keep that bottom line from sinking. It's a constant battle to get the best out of your herd, so I'm thrilled to be in a company that helps farmers do that."

The "short" stint Bratty refers to is her time on a farm in New South Wales, Australia. Born in Upper Hutt and schooled in Auckland, she wasn't born and bred on the land. But the 55-year-old has been attracted to rural life for as long as she can remember.

"I'd always wanted to be in farming.Something about the lifestyle appealed to me. A few years ago, a friend offered me the opportunity to work on a farm in Australia. I'd done agricultural studies and had specialised in dairy production, so I jumped at the chance to live that out on the land.

"I became the assistant manager and worked in every aspect of farming - driving tractors, milking, inseminating cows and pulling out calves. I took it all on and felt at home... until the accident."

In June 2011, severe rains hammered the Dorrigo district in New South Wales, causing a series of flash floods. Bratty was on her way to get the herd in for milking when the floodwaters rushed through the farm and she was caught in the surge. The current carried her for over 2km, dragging her through posts and trees, until she finally landed safely in a neighbouring field. Her legs and arms were broken.

After six months of recovery, she returned to the farm but was unable to cope with the physical workload. That's when she turned to a different sphere of farming: animal breeding.

"I'd learned a lot about animal breeding during my studies, so I decided to pursue it as a career," Bratty says.

"It was a way to stay involved with farming. After working for several breeding companies in Australia, I came back to New Zealand and found my place at CRV."

At CRV, she manages a team of 10 field consultants. Their job is to help farmers tap into the genetic solutions and products offered by the company.

"Providing training is probably my most important contribution. It's kind of like developing a rugby team. One training session won't help much on game day, but if you train often, you'll be better when it counts. I take the same approach with my team.

"We care a lot about farmers, so I make sure we're giving them the best genetic solutions and products to help their herds reach full potential. That's why I run refresher training sessions."

Behind Bratty and her field team is CRV’s team of experts in breeding programming, progeny testing, on-farm data sourcing, herd testing, as well as DNA and artificial breeding specialists. Every area of dairy herd improvement covered.

Bratty believes that the more her team can tap into these resources, the better they’ll be at helping farmers.

There are two other skills that Bratty is training into her people. The first is cold calling.

It’s not easy walking up a farmer’s driveway to start a conversation about herd improvement.

The other skill Bratty’s team needs is empathy – the ability to really understand someone else’s situation.

“I developed empathy from running the family violence unit in the Rodney District police force. I heard some tragic stories, and I learned to listen and read the person sharing their life with me. It’s an emotional-intelligence skill.

“We need that when we’re with farmers. They have goals they’re trying to reach, and obstacles that frustrate them. Our first job is to make them feel heard. Once we’ve understood their situation, we can give them the breeding resources that fit.”

Some dairy farmers could be missing out on up to 160 kgMS of production because they are not herd testing.

Genetics can help dairy farmers take steps this season to reduce their emissions while they wait for further new tools and technologies to be developed, says CRV managing director James Smallwood.