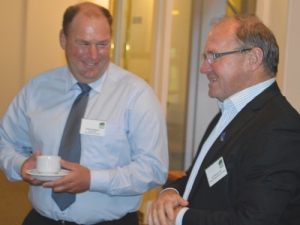 Hoggard told the dairy council conference in Nelson last week that these payments have the effect of insulating farmers from the realities of the world market.

Despite falling milk prices, global milk production remains strong, particularly in parts of Europe; the extra milk is not helping arrest the decline in prices. Normally, when milk prices drop, farmers cut back production and the drop in supply triggers a price recovery.

"The law of supply and demand isn't some contentious theory that is much debated; there is no debate. It's straightforward: if you want higher prices either supply needs to decrease or demand needs to increase, and demand certainly won't increase by filling supermarket carparks with cowshit."

Hoggard points out that Euro 850 million in subsidies is being paid to dairy farmers, as reported by the European Commission.

"These production linked subsidies are particularly for those on marginal land, or in areas where dairy is at an economic disadvantage to other land-use types. Yes, apparently if you live in a region where there are higher value uses for your land for, you can get a subsidy to stay dairy farming rather than switch to the higher value land use. Surely this should be the first production to drop by the wayside in the current environment."

"When, however, 42% of your income comes from support payments, the reality is it influences your decisions and enables you to make different decisions than you would otherwise make. The current increase in supply flies completely against economic logic."

Hoggard says the current downturn is cyclical and structural.

"The current downturn started due to a standard cyclical event -- low demand from one market, China, together with high levels of supply worldwide. It was then compounded by another cyclical event -- the geopolitical market shock of the Russian ban on food imports; but holding us down is the underlying structural issue with the global dairy market, i.e. dairy is a highly protected product."

Only 13% of global dairy consumption is accessible to New Zealand dairy exporters at tariffs below 10%. These barriers mean only a small volume of global dairy production is traded, Hoggard says.

"Put simply, the liquidity of the global dairy market is constrained, making it more prone to volatility. And this volatility is then compounded by some large developed country milk producers continuing to use subsidies and supports to shift price risk from their farmers and into the international market -- the market that sets the milk price."