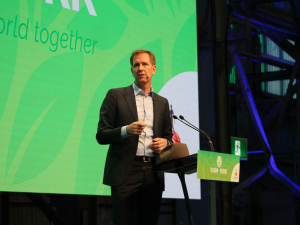 What made agricultural countries successful will not win the next era, says the chairman of Rabobank's managing board.

New Zealand, Australia and the Netherlands have all gone through an amazing agricultural revolution, bringing them to the forefront of productivity and to their role in the global food supply, says Weibe Draijer, the Netherlands based chairman of Rabobank’s managing board.

But what got them there will not win the next era, Draijer told Rural News at the Farm2Form Summit in Sydney yesterday.

“You should with confidence shift to the next game of more sustainable processes,” he says.

“You have the ticket, you have the structural asset of greatly useable arable land with high intrinsic value in New Zealand, a huge share of the global arable surface in Australia and lot of ideas in the Netherlands - use it to also win the next era.”

“However you can already see at least in the Netherlands, the forefront is moving to rapid pace to grab it (the opportunity) - the challenge is to get the other 80% to latch onto it and then you are there.”

“It is not a wholesale resistance of change, it is a spectrum.”

It is understandable from what they have gone through - they have been so successful, they have got their pride, and they have done well, he says. Now they have to do something else and it is a natural response.

Rabobank hopes to be a helpful thought partner, provocateur if need be. “Saying we have confidence that you won the last round, how about stepping forward and also winning the next one - because you can.”

He says the majority of the changes are already “in the money” if you take a long term view.