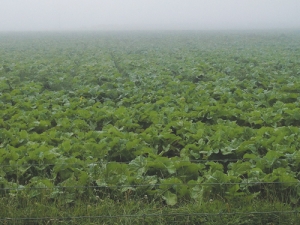 Farmers are being urged to manage how and when they feed swedes to cows.

Nine months since reports of cows collapsing on swede crops in Southland, the exact cause of the casualties is still uncertain.

However, there are good reasons why the inquiry is taking so long and most farmers have already taken steps to reduce risk of the problem repeating this spring, says Federated Farmers Dairy provincial chair, Allan Baird.

“Initially the data [on the cases] just wasn’t available,” he told Dairy News after DairyNZ’s May 29 release of preliminary results from a farmer survey in the wake of the problems.

The survey itself was delayed because of the time it took to identify and contact graziers involved; the dairy farmer side was completed in good time, notes Baird. By the time the grazier list was compiled many were into their peak spring workload so weren’t surveyed until the turn of the year, he explains.

“DairyNZ is apologetic, but it is what it is,” says Baird, who is part of a cross-industry working group on the problem.

Analysis of plant samples also remains on the ‘to do’ list as Crop and Food Research, which had “some capacity” to do the job, said it was “too close” to seed companies to get involved, says Baird.

“DairyNZ’s been trying to develop a process so that, should we require tests again, that facility will exist in New Zealand.”

DairyNZ’s Southland/Otago region leader, Richard Kyte, says the plant analysis results are expected late July and will be “an important piece in the puzzle”. “We can then focus on pulling together our final consolidated report on all the elements of the work we have done on the issue.”

Baird says even then it needs to be recognised the samples taken last spring are only a “snapshot in time” and drawing conclusions on such limited information “would not be particularly helpful”.

“The study of glucosinolates is going to be ongoing…. There’s not just one but lots, and we’re still not sure why the animal gets a toxic reaction to some of them.”

Late grazing of swedes, particularly by springers or early lactation cows, was a common factor in many of the cases last spring and that’s recognised as a risk by Southland’s dairy sector; kale or fodder beet has been grown instead for when the cows come home this year.

“No one has chosen to put HT swedes on the milking platform. Everyone’s aware now that that’s a risky period,” notes Baird.

The HT cultivar – HT standing for ‘herbicide tolerant’ allowing use of broad-spectrum herbicide chlorsulfuron for in-crop weed control – was a frequent but not universal factor in last year’s problems but Baird doesn’t believe the cultivar should be condemned.

“It wasn’t the only crop or brassica where farmers experienced issues, so to hang that variety would not be helpful and would be premature. A lot of it comes back to how you use your crop.”

An unusually mild winter last year meant that by August or early September many early-sown crops were bolting.

Kyte says all swede cultivars “carry a risk of adverse health effects” by the time they’re bolting and the glucosinolate chemistry thought to be to blame changes with swede variety, maturity and growing conditions. Changes to glucosinolates during eating and digestion further complicate the picture.

“If farmers plant swedes, and many have this season, then they need to manage how and when they feed it to their cows.”

Transitions need care, even from swede crop to swede crop, over a minimum of a week and the proportion of swede in the diet should be limited.