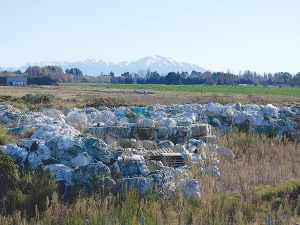 When the Chinese Government banned imports of waste plastic in 2018, it disrupted recyclers around the globe.

Plasback is working with specialist company Southern Xpress to bale and remove about 1,000 tonnes of silage wrap, silage covers and baler twine that have been accumulating for several years.

The story begins in 2018, when the Chinese government banned imports of waste plastic. For decades China has imported and processed about half of the world's scrap plastic. When it abruptly stopped, it disrupted recyclers around the globe.

One that was hit particularly hard was Wastebusters, a charitable trust based in Ashburton that collected a range of farm plastics as well as other recyclables and waste from farms throughout Mid-Canterbury.

The loss of revenue from its exported plastic was enough of a setback that Wastebusters was set to shut down. Coming to the rescue were Brent and Maureen McLaren.

Brent and Maureen had the contract to compost the green waste that Wastebusters collected. Rather than lose a big chunk of their income if Wastebusters were to stop trading, they took over its operation.

"We provide farmers large wooden bins so they can separate their waste," Brent says. "When they are full, we collect the bins from the farm or they can bring them into our yard.

"Since we took over Wastebusters, we have increased the number of bins on farms by 50 percent. We now have about 1,500 bins in circulation. Some large operations have more than 20 bins on multiple farms."

Although the business has expanded, Brent and Maureen were not able to resume exporting farm plastic.

Brent says at one point they were in discussion with an entrepreneur who planned to set up a pyrolysis plant that would turn waste plastic into diesel. That fell through, and Wastebusters' stockpiles grew so much that it became difficult to process some other material on the main collection site.

When Plasback commercial manager Neal Shaw learned of the problem, he approached Brent and Maureen to see if together they could come up with a solution. With some creative thinking and good will on both sides they agreed on a way forward.

Wastebusters is providing the plastic at no cost to Plasback, and in turn Plasbak is covering the cost of processing it and shipping it overseas. Neither party is making a financial gain, but they are addressing a significant waste issue that could impact the local environment.

Another part of the agreement is that Wastebusters has now become Plasback's collection contractor for Mid Canterbury. This means it collects silage wrap, silage covers, twine and other waste plastic from farms using Plasback's bin and liner system.

"Plasback had the capacity to take on the huge job of dealing with Wastebusters' stockpile. We collect more than 5,000 tonnes of plastic every year and we have both local and overseas partners to recycle the product," Neal says.

"In addition to the sheer amount of plastic Wastebusters had collected was the fact that it was in stacks of loose sheets. When farmers out their recyclable material in our plastic liners, it is easier to handle, has less contamination and is more presentable to our overseas clients," Neal says.

Southern Xpress is playing a vital role in the clean-up effort. The Christchurch company runs a unique mobile baler designed to bale tyres to ship overseas for recycling. It has carried out a number of contracts for Plasback to bale farm plastic in both the South and North Islands.

"Because the baler is mobile, we can bale the waste material wherever it is. It is much cheaper to transport bales than bulk waste," Kyle says.

The two main plastic collection programmes in New Zealand’s primary sector have agreed to work together to improve the services they provide farmers and growers.

The two main plastic collection programmes in New Zealand's primary sector - Agrecovery and Plasback - have agreed to work together.