The future for dairy lies in robots 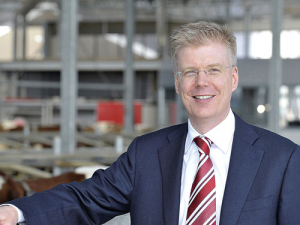 The company is on the brink of introducing a fully automated decision-based farm management system that will run the farm on behalf of the farmer.

“Adaption of automation is really gaining pace now; there seems no end to this trend and there’s a reason for it,” he says.

“Robotisation is for most countries the only answer to labour shortage and to succession. It’s no secret that fewer people want to work in the agricultural industry and automation offers a real solution.”

The company has launched a new, redesigned robotic milker -- the Lely Astronaut 5 -- scheduled to make its NZ debut at the National Fieldays in Hamilton in June.

Alexander Lely says farmers are part of his company’s DNA and its innovations are designed to help farmers enjoy profitable and sustainable dairying.

Future farm integrated solutions from Lely will centre on the cow and automate repetitive tasks in the milking shed so that farmers can “focus on things that really matter”.

“This software uses the many data sources available on the farm and from the ecosystem surrounding it. Instead of only presenting information, the system will propose or even make decisions with the farmer’s permission.

“The system will be self-learning and, over time, will adapt to the farmer’s preferences for running the farm.”

He urged other dairy industry stakeholders, e.g. vets, feed and insemination suppliers, to work with his company.

“We cannot do this alone,” he said.