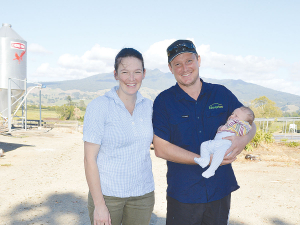 In his third attempt, he won the Waikato Bay of Plenty FMG Young Farmer of the Year.

With calving underway on his 200ha Pirongia farm, Poole is taking out time to prepare for the grand final, to be held in Whangarei early July. And he may have a 'secret weapon' that could help his chances at the three-day grand final event.

Poole's wife Emma Dangen was an FMG Young Farmer of the Year Grand Finalist in 2019 and he's hoping to pick her brains.

"Sheep is definitely a weakness for me being a dairy farmer," he says.

"I'll be doing a bit of study with Emma, she'll have tips for me I'm sure, having done it herself."

In between being a dairy farmer and calf rearer, Poole also works with Connecterra, a new Artificial Intelligence platform in the NZ market.

Poole is excited for the next step and Grand Final preparation.

"That was my third go at a regional final so I was pretty keen to win it which was good to finally do," he said.

"I got pretty lucky in the quiz I think, went a bit bold on some questions and luckily they came my way."

Poole miks 720 Kiwi cross breed cows on the family farm. Calving is done twice a year, in autumn and spring.

Growing up on the family dairy farm in Taranaki, Poole says milking cows was the only job on his mind. After finishing university in 2016, he did just that.

"I was always keen on dairy farming; that's what I wanted to do," he says.

"It's definitely the right job for me. Some aspects of dairying have become challenging but I have no regrets."

Poole points out that some of the challenges weren't around five to ten years ago.

Looming state-sponsored regulations on environment and sustainability and the widening rural-urban divide are just some of them.

"Back in the day, city dwellers knew farmers but these days, city people have little idea of what goes on in farms.

"They are swayed what others think and negative stories in media.

"In school most students don't know about dairying, which is quite sad."

Poole says he enjoys every minute spent on the farm. The strong payout is also pleasing but inflation is rising.

Rising feed, freight and fuel prices are taking some of the gloss off the high payout, he says.

But he will still recommend dairying to any young person.

"There's scope for clear progress with hard work," he says.

"Talk to someone who has been through the ranks," he says.

Poole says he's ready to mentor young people keen on making a career out of dairying.