Thousands of cows shifted, dried off 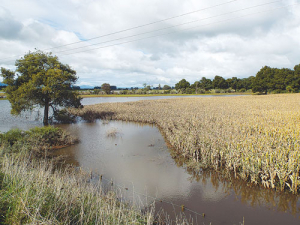 Maize crop, like this one on a Hauraki Plains farm, may not be harvested due to water-logged farms.

At least 7000 dairy livestock have been affected in the recent storms in Waikato and Bay of Plenty alone and hundreds of hectares of pasture and maize crops have been damaged, DairyNZ reports.

About 5000 dairy animals were moved from Bay of Plenty and 500ha of maize was impacted. Some may be used for silage but the quality is reduced.

After the first meeting since the Cyclone Cook event the Waikato Rural Emergency Cluster group reported that 2000-plus cows had had to be dried off and new temporary homes found for them.

DairyNZ North Waikato regional manager Phil Irvine says hundreds of hectares of maize crops may never be able to be harvested as the ground will remain too wet for machinery. These are mostly poorly drained peat soils.

“The longer term issues are pastures damaged through silting or being under water so long that they will have to be re-grassed and, as we are going into winter, the recovery will not be until well into next spring,” he says.

If flood water has only covered pastures for two-three days and there is no silting the impact is minimal, but this is the second or third flood in the last month. The Federated Farmers feed line is up and running and balage is going into the area by the truckload.

“This is an expensive form of supplementary feed but it’s needed to provide a balanced diet for the cows,” says Irvine. “For the worst hit farmers, getting cows off the milking platform is key. This can be a relatively cost-effective form of ‘supplementary feed’.”

“These conditions are bringing a lot of stress on already challenged farmers so farmer wellness and wellbeing should be a focus.”

“Quite a bit of maize silage is still standing so there is a risk that by the time these paddocks are in new grass they might not get their first grazing until spring.”

Federated Farmers says a call is out around the central North Island for more grazing and supplementary feed.

Since the Rangitaiki River burst the stopbank at Edgecumbe on April 6, and the township and farms around the district were inundated, the Federated Farmers support line 0800 FARMING (0800 327 646) has fielded nearly 150 calls.

General manager membership Lyndel Stone says most have been about grazing or feed, with requests for help outnumbering offers of help two to one; other calls have been about pumps, manpower and the like.

Bay of Plenty Federated Farmers president Darryl Jensen also estimates at least 5000 animals have been plucked from flooded paddocks in the district and transported to less affected properties. As many as 40 portable pumps have been in action.

“It’s so important now to get grass seed and fertiliser onto the paddocks in preparation for winter,” Jensen says.

“When farmers can see grass germinating rather than an ugly brown mess, the knowledge that feed is growing for their animals is a massive psychological boost.”

Federated Farmers has also sprung into action on the Hauraki Plains, where dozens of farms have been affected by the Piako River overtopping flood defences.