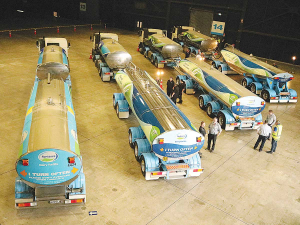 Three new milk trailer designs, next to the current model on the left, are being tested on New Zealand's roads this season.

A familiar sight on our roads, Fonterra's milk tankers provide the vital link in getting the "white gold" off dairy farms and into the nation's milk factories.

With a nationwide fleet of around 475 trucks and trailers combinations - each with a combined value of $700,000 - cumulatively covering 93 million kilometres annually, the logistics of operating such a large fleet is not taken lightly.

With a replacement policy that typically sees the truck chassis' moved out at seven years, with trailers good for about twenty years of so, the company is always looking to replace the current hardware with newer versions.

With an eye to efficiency, collection capacity, maneuvrability, fuel consumption and sustainability, a battle to be the next preferred trailer unit is currently underway. With a target to increase milk collection productivity by 8-10%, the result will be reduced kilometres, less fuel consumption, fewer tankers on the road and a reduction on the co-operative's impact on the environment.

Three designs are being tested on New Zealand's roads this season, collecting specific operational data and driver feedback to see which performs best.

The current, classic tanker offers a capacity of up to 15,000 litres, whereas the three new designs are two metres longer and can hold up to 21,000 litres.

One is the brainchild of one of the co-operative's own tanker drivers, while the others are designed and built by transport engineering companies, Domett and Longveld.

Reporoa-based Fonterra driver Bill Groves has been dreaming up his trailer for the past seven years and is proud to see it finally on the road, having been supported throughout the design and build phase by his employers.

Bill says it's been a "really cool journey to be a part of and just being able to be here right now is awesome".

"Fonterra has treated me like family, and I am so proud to be a part of this team."

The Groves trailer design is the first of its design, with a patent pending, and draws on Bill's experience in a previous life driving a logging truck. It features twin, double axle assemblied with an interconnecting pole coupling for good maneuvrability and safety when entering and exiting a corner. A more oval shape allows the tank to be mounted lower, thereby increasing stability.

Domett's Generation 4 Trailer also incorporates a more oval shaped tank, meaning it can be mounted lower in the chassis making it more stable, while incorporating three integral baffles to reduce surge when part loaded. A clever steering system sees the two rear wheels steer with the front of the vehicle, aiding maneuvrability.

The Longveld desing has a space-age look, with an elliptical tank that is said to be stronger, more stable, and therefore safer, with the added benefit of the shape making tanks easier to clean.

"We are currently trialling the trailers around the North Island because there are a lot of older farms with tanker tracks that were built for smaller trucks.

"This isn't so much of an issue in the South Island, as a lot of the dairy farms are relatively new and have good access for our vehicles."

McColl's first impressions of the three designs is positive.

"Bill's is quite radical and different from the other two, which are really variants of what we currently have. It's certainly given us something to compare over the next year, with driver feedback being a key indicator of how well the trailers performed."

"Over the next 12 months these three trailers will undergo testing, collecting data to make an informed decision on which of the trailers has performed the best and will be safest for our operators and communities."