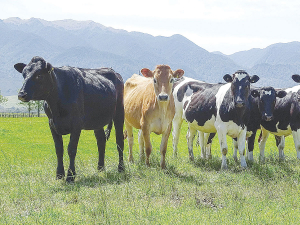 West Coast dairy farmers are being urged to make sure they manage the winter carefully and have a Plan B ready in case things go wrong.

DairyNZ’s head consulting officer for the South Island, Tony Finch says the West Coast is like no other region in the country. This is because it has heavy rains in the south around Fox Glacier and dry conditions in the north around Karamea. He says the coast generally deals with wet weather well, but this year there have been challenges.

“They went into winter with the crop yields down and they have had some patchy weather having gone through a mix of dry and wet weather. Last season was a poor growing season with fewer sunshine hours – so they have been playing ‘catch up’ going into winter,” he told Dairy News.

Finch says the challenge will come later in the winter and early spring. He adds that when looking at how the last two springs have played out, that’s been where the pinch points have been.

“That is where the focus is now and how farmers manage their way through that,” he explains. “Our job is about preparing farmers and their staff that when calving comes in late winter early spring, getting them to think about how they can manage what feed they have well,” he explains.

“It’s also about keeping morale high, because during that busy period its wet and people can get down – so it’s a case of preparing for that.”

Finch says employment on the West Coast is also a challenge, as it is in most parts of the South Island. He says there is a tight labour supply issue and that affects the coast as much as anywhere in the South Island.

“If anything, the West Coast can be even more challenging at times because it has a degree of isolation about it and finding staff – no matter where you are in the South Island – is challenging,” he says.

Like all parts of the country, the West Coast has to deal with issue of winter grazing, but Finch says they are busy getting the message out to farmers to implement good management practices.

“The messaging to West Coast farmers is having a winter plan that is written and in place and making sure they have what we call a Plan B,” he adds. “This is so that when they get a heavy amount of rain – and it will happen – how they manage their livestock and the environment to the best.”

Finch says this might mean having a plan to provide additional shelter or firmer ground where the cows can be grazed.